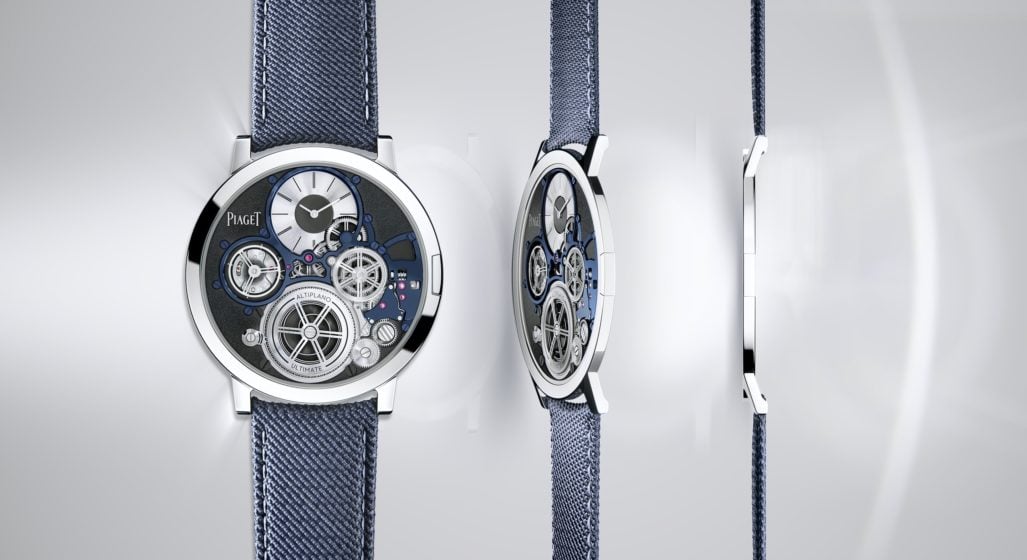 Piaget has officially released the world’s thinnest watch (mechanical, hand-wound), a project which has taken four years of development. Dubbed the Piaget Altiplano Ultimate Concept, their investment has paid off in spades – given how far they’ve pushed the limits of material reality, as well as the new heights of elegance this timepiece itself has managed to reach.

Measuring at an astounding 41mm diameter x 2mm depth – yes, as in millimetres – the Altiplano Ultimate Concept is both sleek and striking. Appearing in cobalt alloy case, it apparently functions as a “total fusion between the case and the manufacture movement.”

Piaget’s 900P-UC calibre is embedded into the face, showcasing an exposed mechanical system in plain view under the sapphire crystal encasement – an impossibly thin element of the timepiece at just 0.2 mm, which practically defies belief.

The contemporary silhouette has also been upgraded with brand new barrel and energy regulation constructions. Additionally, one may expect to find an integral winding crown as well as a textile strap, complete with a cobalt ardillon buckle.

The price for Piaget’s Altiplano Ultimate Concept – AKA the newly crowned world’s thinnest watch – is currently only available upon request. Though it doesn’t take an expert of horology to tell you it’ll cost a pretty penny.

Find out more over at piaget.com.