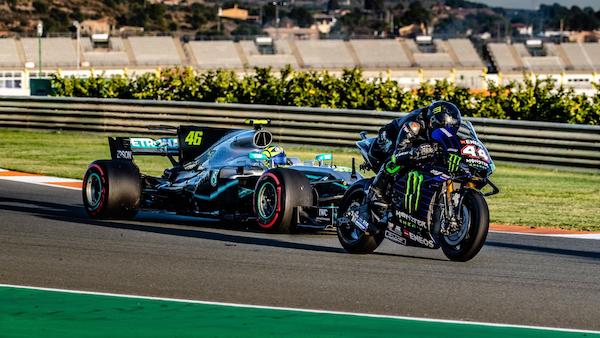 Lewis Hamilton and Valentino Rossi have set the racing world on fire after the two swapped machines at the Circuit Ricardo Tormo in Spain.

Six-time F1 champion and known bike lover Hamilton took Rossi’s 2019 Yamaha MotoGP YZR-M1, which Rossi only rode a few weeks earlier, for a few laps around the Spanish circuit. Not to be outdone, nine-time MotoGP legend and car lover Rossi got behind the wheel of Lewis’s 2017 championship-winning car, the W08, and tore things up.

In the clip below you can see Rossi giving Hamilton some tips while both drivers discuss the challenges of driving each others vehicles.

“It’s so awesome to see a legend like Valentino in the car. I’m excited for him, for discovering the car for the first time. Reminds me of my first time in an F1 car,” said Lewis.

“I was a big fan of Lewis’ before but now I am even more. I felt like a real F1 driver for a day. I didn’t want the day to end,” Rossi added.

The two champions seem to genuinely enjoy each others company along with whipping around the Spanish track in their respective racers, with this promotional stunt another reminder of how talented these two really are.