UFC 261: Everybody’s Got A Plan Until Their Legs Give Out

In the words of the great one himself, everybody’s got a plan until they get punched in the face – or in the case of MMA, everybody’s got a plan until their legs give out. On paper, UFC 261 promised to deliver some bona fide highlight-reel moments. In reality, it exceeded expectations in every possible sense, from gnarly injuries to explosive quick finishes. Safe to say, this weekend’s short-and-sweet affair yielded enough material for Dana White’s marketing team to flog throughout the next fiscal year.

The main card opened with results that could only be described as two sides of the same coin. After generously dishing out the leg kicks, Anthony Smith claimed victory against Australia’s own Jimmy Crute, the latter of whom succumbed to his all-too-damaged foundation.

Immediately after, Uriah Hall entered the octagon looking to avenge his first professional loss against Chris Weidman… only to have his ambitions for glory assassinated on the spot when Weidman’s snapped his own leg against Hall’s knee when the opening strike was checked; a poetic bit of irony given Chris Weidman had been on the other end during his rematch with Anderson Silva (watch the clip below at your own discretion and maybe avoid looking for the slow-mo replay – it ain’t pretty).

As expected from an athlete of her calibre, Valentina Shevchenko ran through Jessica Andrade like a goddamn buzzsaw, out-striking and smothering her Brazilian opponent at every given opportunity. Shevchenko successfully defended her title in the second round with a TKO via elbows after masterfully tying Andrade up in a crucifix position.

Next up in the trio of title fights was the much-anticipated showdown between who many assumed to be a granite-chinned pugilist in reigning UFC Strawweight Champion Zhang Weili against the equally celebrated Rose Namajunas. In the lead up to this bout, due to some incendiary comments about “Communist China” and being “better dead than red” from the challenger, this had been packaged into something not entirely unlike Rocky IV. In stark contrast to Rocky IV – not to mention Weili’s last five-round barn burner against Joanna Jędrzejczyk – there was a swift conclusion wherein Namajunas reclaimed the title with an unforeseen head kick during Round 1.

By the time Kamaru Usman and Jorge Masvidal entered the cage to run it back for the belt – the second time in less than ten months with no excuses surrounding short notice for Masvidal this time around – audiences the world over didn’t know what the hell to expect. Surely we weren’t lucky enough to receive something on par with the rest of the card… right? Wrong.

Fans have long criticised The Nigerian Nightmare for being “boring”, but “boring” is just a euphemism for consistency. And that’s arguably the most dangerous aspect of Usman’s game: not his wrestling, his steady evolution. Coming into the MMA world with a grappling background, no one expected his striking to reach a level where he could viably stand and bang with someone who had far more experience in this aspect. In the second round, Usman placed himself in contention for current #1 pound-for-pound fighter when he baptised Street Jesus himself, quite literally knocking the water out of him, and defending the title in dominant fashion for the fourth time in two years.

Now if only every Sunday could be a UFC 261 weekend. 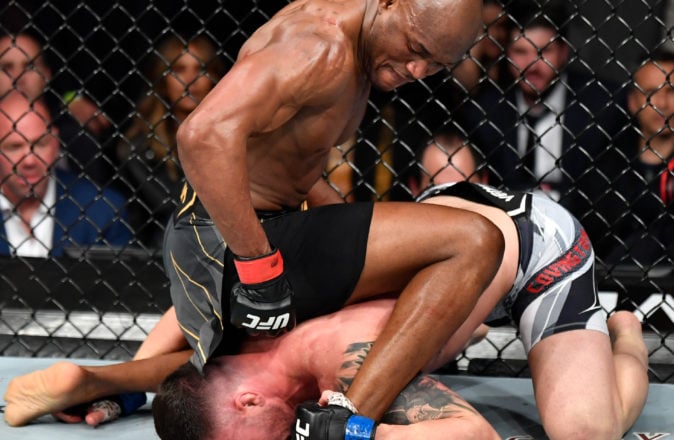