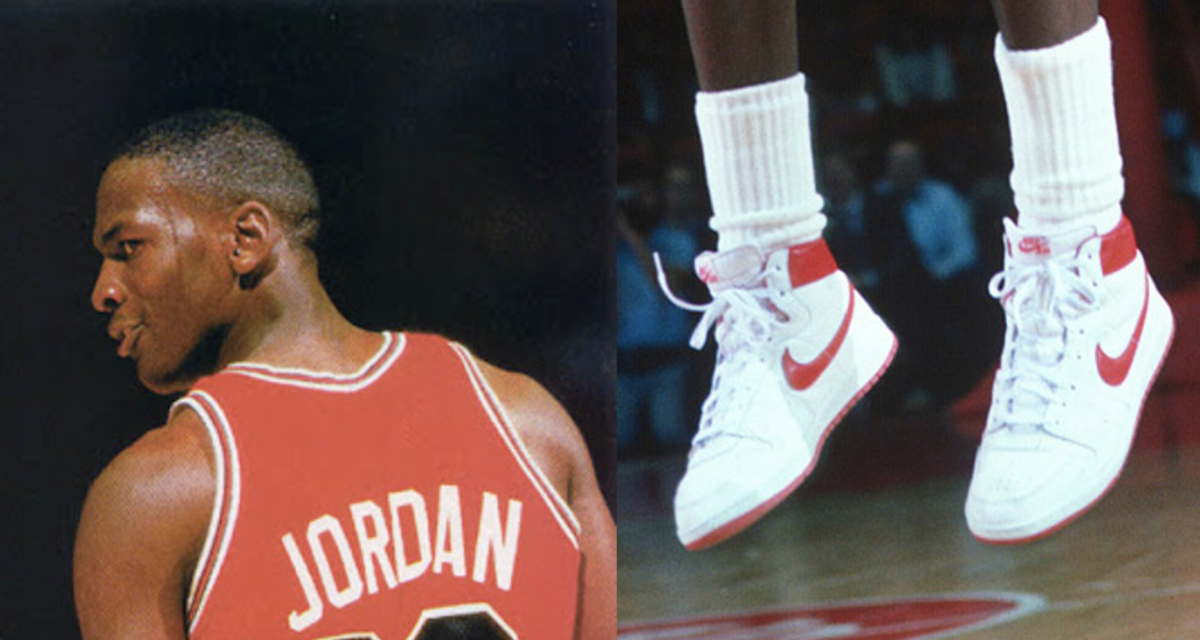 UPDATE (29/10/2021): The debut sneakers of Michael Jordan sold for US$1.47 million (AU$1.95 million) to collector Nick Fiorella at Sotheby’s Icons of Excellence & Haute Luxury auction in Las Vegas. The “Pre-Jordans” now officially have the record for highest price achieved for a pair of sneakers at auction, with no pair ever said to have exceeded US$1 million (AU$1.3 million).

Before ever stepping foot onto an NBA basketball court, Michael Jordan signed a deal with Nike to create the signature line of shoes and clothes that would ultimately come to define his career. These are not those shoes. The famous Air Jordan 1 wasn’t ready in time for his debut, so Michael Jordan was forced to briefly wear Nike Air Ships until his new sneakers were ready. For a seven-figure sum, they could soon be yours.

Since MJ only wore the Air Ships for a brief period of time – from the 1984 preseason to a few games of the regular season – an authentic game-worn pair is exceptionally hard to come by. This pair specifically was worn by Jordan during his 5th ever NBA game, on November 1, 1984. If it’s worth anything to you, Jordan put up 17 points, 5 rebounds, and 5 assists in a 129-113 loss to the Denver Nuggets.

After the game, MJ – whose reputation at the time was as an exciting third draft pick out of North Carolina – gifted his size 13 shoes to Denver Nuggets ball boy Tommie “TJ” Tim III Lewis, who has kept them in his possession for the last 37 years. Sprawled in some faded red marker, the outside of the left shoe reads:

If you know a Michael Jordan fan that also happens to be named TJ, I don’t think there is a better Christmas present for them out there.

While these shoes aren’t as infamous as the banned “Bred” colourway featured in The Last Dance, they represent a rare piece of basketball memorabilia as His Airness’ earliest known shoes in the NBA. Sotheby’s expects that the sneakers will rake in anywhere between US$1 million (AU$1.3 million) and US$1,500,000 (AU$2 million) when they hit the auction block on October 24.

“Michael Jordan and the Jordan Brand helped redefine what a signature line formed around an athlete could be,” says Brahm Wachter, head of Sotheby’s Streetwear and Modern Collectables.

“This pair, with provenance from Michael’s fifth NBA game really touches two worlds as the Nike Air Ship hold a special place in the hearts of sneakerheads as the precursor to the Air Jordan 1, but beyond that, it is also simply an incredible artifact that dates to the nascency of Michael Jordan’s rookie season.”

Back in August 2020, Christie’s auctioning off a 1985 Air Jordan’s pair sold for US$615,000 (AU$829,000) – giving it the record for the highest price auction shoe. But seeing as how these are expected to go for almost double that amount, Sotheby’s are hopeful that they will smash the record by the end of the month. It speaks to the cultural phenomenon of Michael Jordan that his shoes from a random game – where his team lost and he didn’t even play especially well – can potentially set the record for the most expensive pair of sneakers ever sold at auction.

If you would like to make your own bid on the shoes, you can hit the link below.