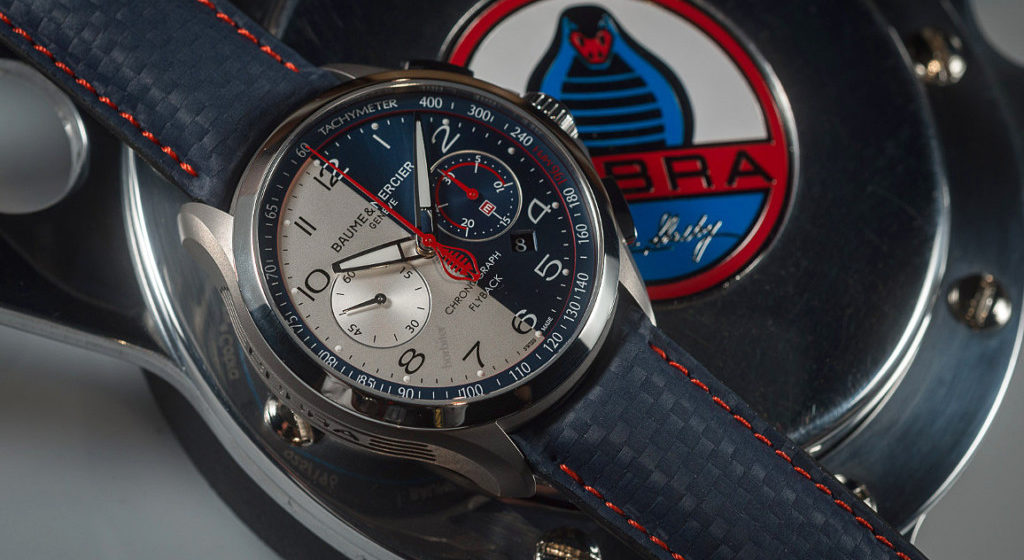 Baume et Mercier, had you heard of it? I hadn’t.

The boutique Swiss watch brand has flown under our radar for a while now, until this happened.

Enter the design inspiration of a 1964 Shelby Cobra, a limited edition piece of automotive mastery that naturally became the backbone of a luxury boutique Swiss watch collection. This range, known broadly as the Clifton Club, encapsulates the epitome of the modern ‘gentlesportsmen’ – the love of the team, the game, and the camaraderie that accompanies both.

The series of exclusive chronographs celebrate the Daytona Coupe’s special achievements, with the car’s original chief designer Peter Brock, collaborating with Baume et Mercier for these three variants of the signature collection.

Exuding supreme style and performance are two 44mm chronographs, available in either silver or a Daytona blue replete. Tributes to the 1964 classic are not only found in its striking tri-colour tones, but also in the key functions that replicate the Daytona’s foot pedals and the alloy wheel replication on the rear of the oscillating weight.

Wearers are privy to an “automotive carbon-like” calfskin strap with red rubberized soft-touch calfskin lining, and an additional subtle nod to motorsport with vertical racing stripes on the background of the watch face. The Cobra 1964 is naturally, limited to a mere 1964 pieces.

The final addition to the Clifton Club’s Cobra range is the 44mm two-faced Flyback chronograph, with a blue carbon-like strap limited to a dramatically lesser amount of 196 pieces. A personal favourite of ours.

The bold yet elegant touches on the Cobra variants are similarly found alongside their Clifton Club brothers, yet are tweaked with hints of minimal style and monotone sophistication. Each are fitted out with Swiss automatic Sellita SW200 movements with 48 hour power reserves.

ƒƒAvailable in a 3-row polished & satin-finished stainless steel, ƒƒ a black vulcanized rubber strap with gills or a black “All Road” calfskin embossed with exclusive sailcloth pattern, these Clifton Club members are simple yet sporty, designed for the active modern man.