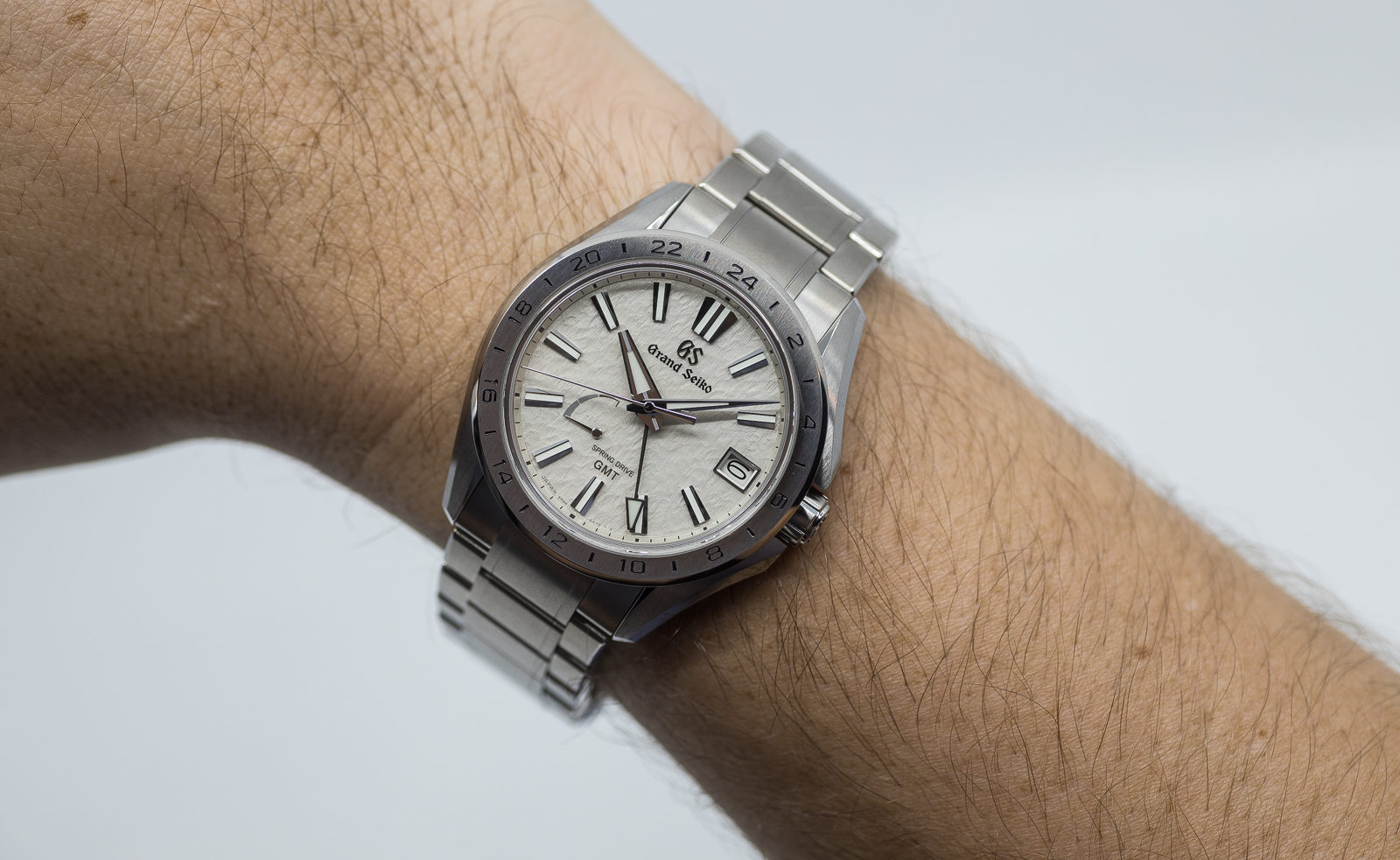 When Baselworld and SIHH announced they would unite in 2020 for a new format Watches & Wonders, horology fans were giddy with excitement. Of course, COVID had other plans, forcing the inaugural tradeshow to be cancelled in 2020, and executed (haphazardly) online in 2021. Finally, Watches & Wonders 2022 was able to go ahead.

In 2022, media, wholesalers and retailers have returned to the hallowed halls of Palexpo Geneva for the most important timekeeping event on the calendar to handle the best new watches of the year, and it has not disappointed. Boss Hunting was on the ground in Geneva to shoot and swoon over releases from the world’s best brands and produced a daily vlog (you can watch below), discussing the show, the people and the releases.

We discuss the 5 new releases from Grand Seiko before venturing to an incredible estate on Lake Geneva to inspect Gucci’s phenomenal haute horology pieces.

We choose our favourite releases from touch and feel sessions with Baume et Mercier, Cartier, TAG Heuer and Vacheron Constantin.

We take a look at Tudor’s ultra-wearable and excellent value Black Bay Pro, Panerai flexes its environmentally friendly muscles and TAG Heuer releases a watch powered by the sun.

We pick out our favourites from JLC, sit down with our favourite man from Chopard, and consider the colours coming out of IWC.

The final day of Watches & Wonders 2022 was all about independent watchmaking from Laurent Ferrier, as well as highlights from Hermes and A. Lange & Söhne.

A. Lange & Söhne Odysseus In Titanium

German-based A. Lange & Söhne came across the border into Switzerland ready to leave jaws on the floor, with the release of the sporty Odysseus in titanium. It’s the brand’s youngest design but already has earned a legion of fans thanks to its balanced dial and expertly crafted case and bracelet. The Odysseus was already available in steel and gold, but with the addition of a titanium reference, A. Lange & Söhne is bringing a new meaning to lightweight luxury.

IWC has poured love and attention into the Pilot’s watch collection over the last couple of years, and it’s paying off, with offerings that deliver something for everyone. One of our favourite new releases within the collection is the IWC Pilot’s Watch Chronograph 41 Top Gun Ceratanium, presenting a full-black timepiece that was born for the nighttime cockpit.

Cartier Tank With Black Dial In Yellow Gold Or Steel

As always, Cartier is out in force with an impressively diverse collection filled with new designs and historically inspired releases. Two of Boss Hunting’s favourites were the Cartier Tank with a black lacquered dial, available in yellow gold with a mechanical movement or stainless steel powered by a quartz calibre. Both options are a study in restrained minimalism, with the yellow gold a little warmer, but the steel serving up an icy cool that could easily be an everyday timepiece.

Sure, Patek Philippe is universally known for creating some of the world’s most complex and beautiful timepieces, but there’s a special place in the history of the brand for the World Timer. One of a trio of newly released traveller watches, the Patek Philippe World Time Ref. 5231G is one that Australians and the rest of Oceania should love.

In what might be the most surprisingly delightful wristwatch we saw during our time at Watches & Wonders 2022, the Piaget Polo Date ticks more boxes than you’d ever expect from a simply executed wristwatch. With a nicely proportioned steel case, impressively comfortable rubber strap and a remarkably slim movement inside, it’s a watch that gets the details right.

Not just Tudor’s top release but arguably the top release of Watches & Wonders 2022, the Black Bay Pro brings mighty Explorer II 1665 vibes at a far more palatable price point. Sized at a stupendous 39mm, it is perfectly proportioned, and with GMT functionally, ready for any adventure with a robust, stainless steel bezel. Available on bracelet (our pick), nato strap or innovative hybrid rubber/leather strap, there’s absolutely no excuse not to want this watch. 3,800 CHF on the bracelet.

Brilliantly bold and technical the 45mm TAG Heuer Aquaracer Professional 1000 Superdiver is depth rated to 1000m but is comparatively thin at 15.75mm for a saturation diver. A ceramic bezel boasting an orange 10 min quadrant nods to TAG’s first Ref. 844 diver representing safety in the ocean. A spring-loaded steel crown guard protects the crown from shocks, while powerful luminous indices and a blue hour hand indicate the time in the dark for up to 70 hours from the in-house calibre with 5 years warranty. 6,500 CHF is a bargain given its capability.

The JLC Polaris has remained somewhat under the radar since it launched alongside a very popular and limited edition Memovox piece. As a three-hander automatic the 41mm case has always appeared a touch too large for the dial – it would have been a ripper at 39mm. Fortunately, the arrival of the Polaris Perpetual Calender’s four subdials means the dial is no longer swimming, and the total proportions of the watch are spot on – even more so than the chronograph. The fume dial is also something special. Available in rose gold (€37,700) or steel (€25,600), the function brings some high complication clout to the Polaris line and when you consider the brand and its pedigree, the pricepoint is fairly approachable.

Grand Seiko opted for quality over quantity in 2022 launching their standout Kodo Constant Force Tourbillon, flamboyant White Lion and five additions to their Evolution 9 collection, which marks the next step for the brand’s design language and takes legibility and comfort to a new level. Picking a favourite amongst these wasn’t an easy task but it was the creamy grey textured dial – inspired morning mist in winter in the Shinshu region – that won us over in the end, providing the perfect backdrop to the broad indices, lumed hands and steel bezel with striking new font. Featuring a subtly curved case of high-intensity titanium and a fluid spring drive movement the Grand Seiko Evolution 9 Sport Spring Drive GMT SBGE285 embodies absolutely everything the brand stands for. Yours for $12,500.

For a quarter of a century, the L.U.C collection has represented a pinnacle of watchmaking at Chopard, and this year it celebrates its 25th anniversary. To mark the occasion, the family-owned firm has released a trio of new watches, two of which are magnificent in their complexity, and the other which neatly articulates Chopard’s capacity for truly elegant watchmaking. The Chopard L.U.C XPS 1860 Officer is both traditional and (relatively) simple, and gets better the closer you look at it.

If you’re a fan of Panerai, there’s a good chance you’ll be enamoured of the new Submersible QuarantaQuattro Carbotech Blu Abisso. QuarantaQuattro is 44, for the dimensions of the case, made from the brand’s proprietary Carbotech material, which is 15% lighter than titanium. Despite being a large watch it wears like a dream, strapped to the wrist with a buttery soft, recycled, rubber strap.

Just a single year after Audemars Piguet released its famous Royal Oak, arguably the first luxury sports watch in history, Baume & Mercier launched the Riviera in 1973. Today, the pinnacle of the collection can be seen in the Baume & Mercier Riviera 10617, which blends nearly half a century of history with contemporary design codes.

While Vacheron Constantin is a watchmaker who is more than capable of dipping into the archives to inspire its more classically designed watches, the new Les Historiques 222 might be the most modern reissue the brand has ever released. Perhaps Vacheron Constantin executives noticed the recent rise in vintage 222 prices, or perhaps they enjoyed the numerological link to 2022, but whatever the reason, this year the storied Swiss watchmaker has released one of their most compelling watches in years.