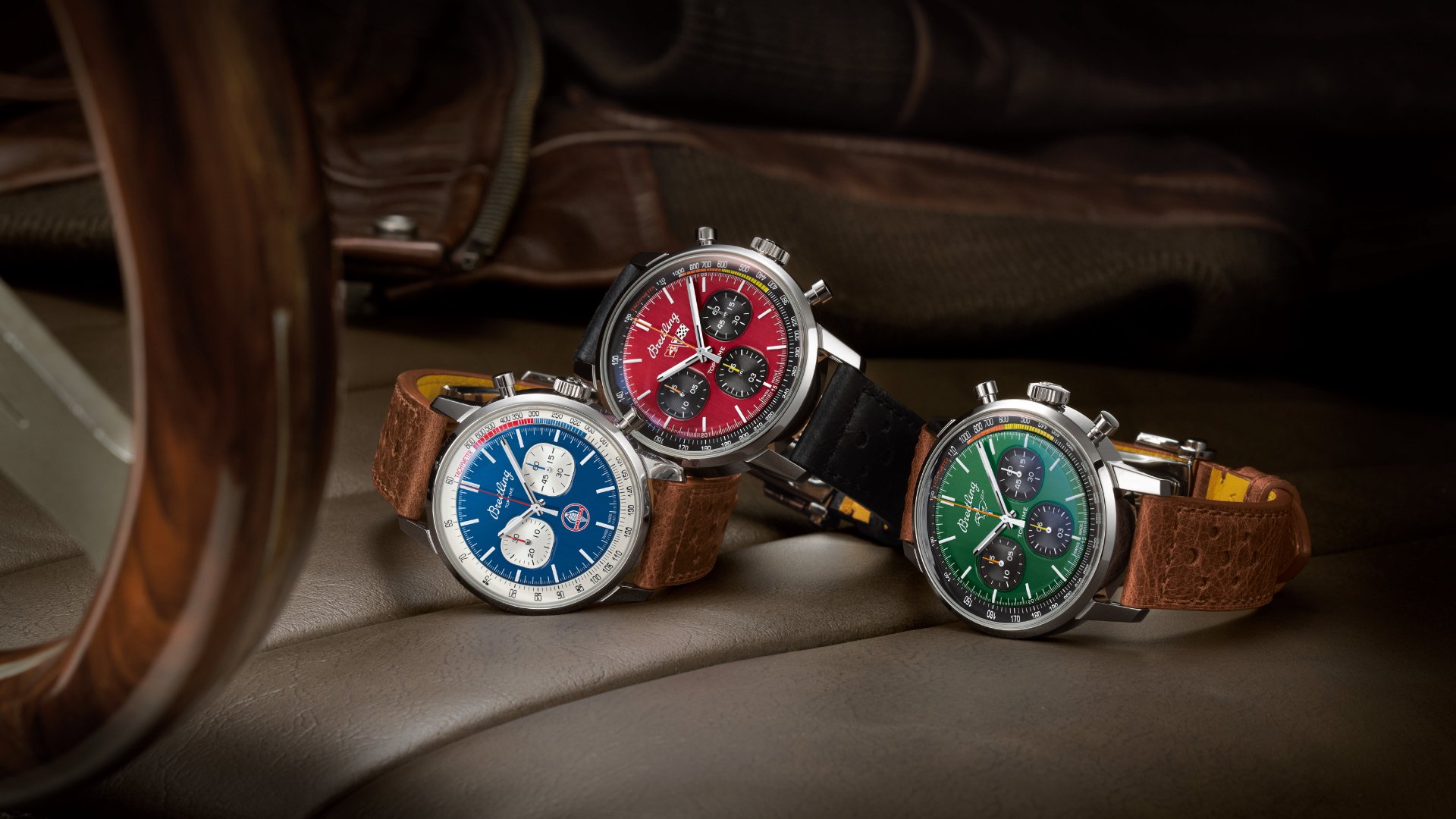 While Breitling might be thought of as a brand for pilots, it also has an automotive history worthy of your attention. Thanks to the same accurate chronographs that were so loved by the pilots of the first half of the 20th-century, Breitling was embraced by car manufacturers for their dash clocks and chronographs. Today, the St. Imier founded brand has put a part of that history into the spotlight, with the new Breitling Top Time Classic Cars Capsule Collection.

While the design has remained fundamentally the same as those early chronographs, this new collection revives the aesthetic of the golden age of motorsport – the 1960s. Each watch is directly inspired by a different icon of American car culture from that era – the Ford Mustang, the Chevrolet Corvette and the Shelby Cobra.

RELATED: Inside Our Exclusive Evening At Breitling’s Sydney Boutique

The collection also takes inspiration from the original Breitling Top Time references of the same 1960s period, with highly legible dials that are easy to read from behind the steering wheel. Each watch from the collection boasts the signature colours of the car which inspired them, with a green dial for the Ford Mustang, a red and black dial for the Chevrolet Corvette and the Shelby Cobra inspired piece in blue.

While all three of the watches have performance-focused specifications, that isn’t the main purpose of the collection.

“It’s about the journey, not the tempo. And that’s true whether you’re tinkering under the hood or hitting the road for a Sunday ride celebrating these beautiful machines,” explained Breitling CEO, Georges Kern.

All considered, the Breitling Top Time Classic Cars Capsule Collection is successful in its ambition to revive the spirit of these classic cars, even if you aren’t always driving one of them. With plenty of period-correct vintage design cues thoughtfully blended with the latest watchmaking technology under the dial, Breitling has skillfully walked the tightrope between the past and the present. Now, let’s take a closer look at each of the watches.

The Breitling Top Time Shelby Cobra is the most modestly sized of the new collection, featuring a stainless steel case that measures 40mm in diameter and 13.3mm thick. Also, unlike the other two references, it features a two-register chronograph, allowing ample space for the Shelby Cobra logo in the 6-o’clock position, as well as on the solid caseback of the watch.

With 100m of water resistance, the Cobra Top Time is powered by the COSC-certified Breitling Caliber 41, which has 42 hours of power reserve and a chronograph function that can measure to within 1/4 of a second. The watch arrives on an attractive brown leather rally-style strap, which is secured with a folding clasp.

Next up, we have the forest green Breitling Top Time Ford Mustang, which also arrives on a brown leather rally strap. It’s slightly larger than its blue sibling, with the steel case measuring an optimum 42mm in diameter and 13.65mm thick. It also features the logo of its four-wheeled-inspiration, but thanks to the three black chronograph subdials, the galloping stallion is located in a pride of place just below the Breitling logo.

The Breitling Top Time Ford Mustang is also powered by an in-house COSC-certified caliber, but this time it’s the slightly larger Breitling Caliber 25. The watch is rich with detail, such as the red and yellow graduations around the first third of the tachymeter scale, which is also present in the last watch of the collection.

Last, but certainly not least, is the Breitling Top Time Chevrolet Corvette with a burgundy dial. Featuring the same slightly larger case dimensions as the Top Time Ford Mustang, it is also powered by the same Breitling Caliber 25 that offers 42 hours of power reserve. The iconic double-flag Chevrolet Corvette logo is prominent beneath the Breitling logo at 12 o’clock, which can also be found on the solid caseback at the rear of the watch.

But what makes this reference stand out is the boldly contrasting black subdials and matching leather rally strap, which combines with the deep red of the rest of the dial very nicely indeed. It might be the sportiest feeling piece of the collection, because after all, everyone knows that four wheels under red go faster. 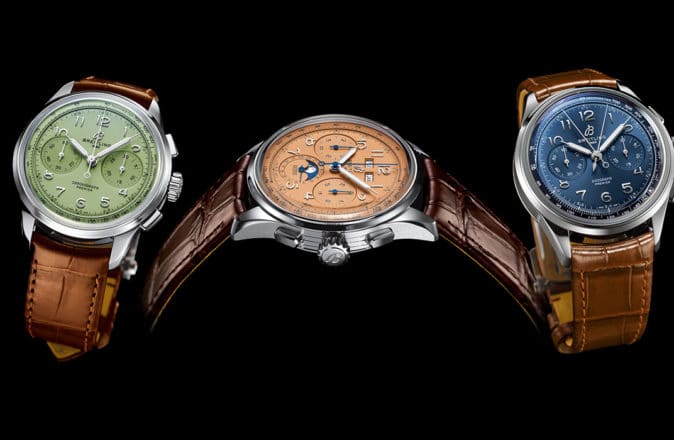 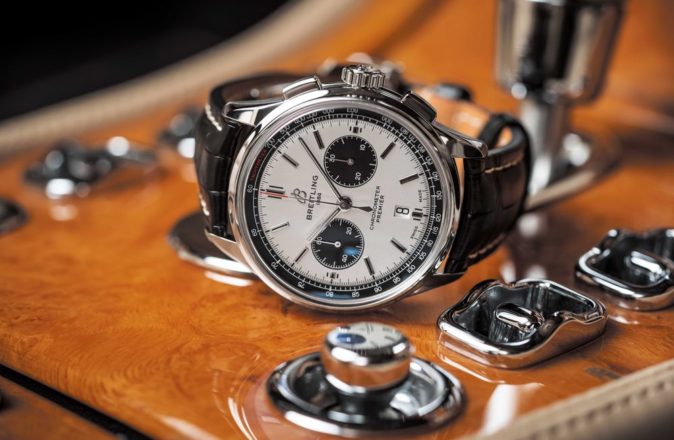 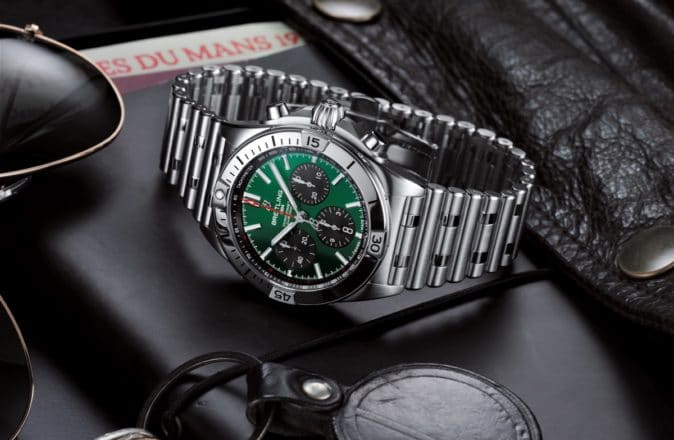