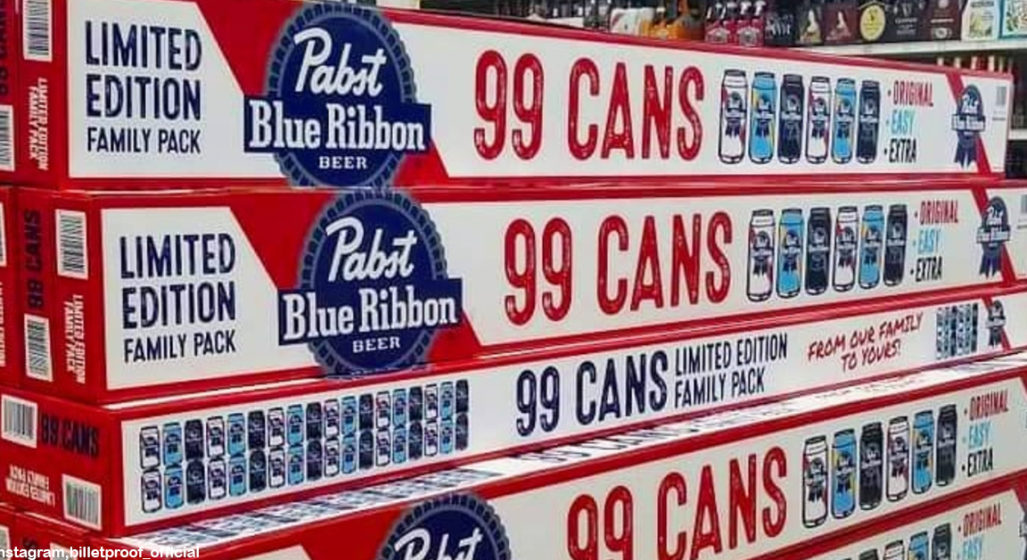 Late last year, Pabst Blue Ribbon threw down the gauntlet by unleashing an ungodly 99-pack of beer. I personally raised the issue with my fellow countrymen and Victoria Bitter to answer the challenge… but the challenge sadly went by uncontested. Now, in a graceful act of mercy, Pabst Blue Ribbon 99-beer packs have arrived domestically to fuel your weekend debauchery.

I won’t lie to you, Australia – the pain of VB failing to remedy the initial situation complete with deafening silence still hurts. It was, after all, a defining moment in pisshead history wherein Aussies had the chance to definitively prove our international king-shit status. In any case, this isn’t a bad consolation prize. It just feels like a passive act of surrender.

Spanning an impressive two metres long and weighing a hefty 37kg, these 99-beer slabs hold enough liquid content to fill a small keg. Unsurprisingly, it’ll also set you back a considerable $250. Although in all honesty, that’s a pretty good bargain when you consider the:

Cop your very own mammoth Pabst Blue Ribbon 99-beer packs today over at craftcartel.com.au and find local stockists at tribebreweries.com.

You know we’ve just ordered one for the office.