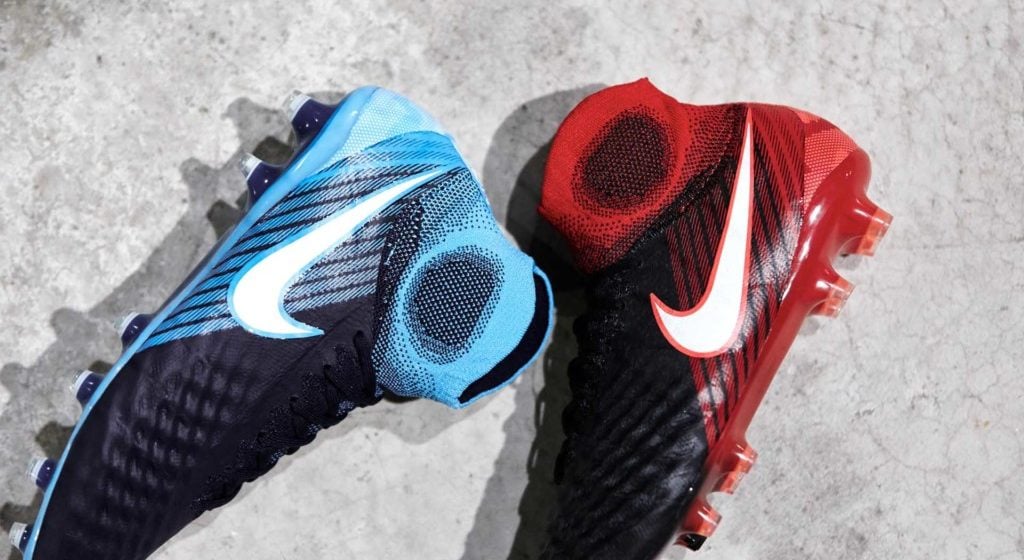 Inspired by the fiery passion of world football and the ice-veined reliability of Nike’s professional athletes, the collection features either ‘University Red’ Fire or ‘Gamma Blue’ Ice wraps, and arrives as the largest Nike on-pitch boot collection in several seasons. 14 different boots covering hi-top, lo-cut, hard ground and soft ground, all in Fire & Ice colourways; including the Hypervenom, Magista, Mercurial and Tiempo models.

We managed to get our hands on a pair of the Mercurial Superfly V Ice editions—worn among others by Cristiano Ronaldo—and theres no doubting the tech behind the boot itself. Featuring a full Flyknit upper, the Superfly V has what Nike calls 3-D textured ‘Speed Rib’ construction, which adds friction on the ball for increased high-speed ball control. Combine that with the Swoosh’s staple All Conditions Control (ACC) tech, and you’ve got yourself the ultimate control boot for both wet and dry conditions (looking at all you Victorians).

Across the top end of the range, Nike claim Formula 1 and general motor racing tech has inspired much of the design and function, with an emphasis on delivering quick and creative hardware for their athletes. Needless to say, since the boot dropped at the start of November Cristiano has since smashed the Champions League scoring record while wearing them, so the performance tech is clearly there.

Other Nike athletes to feature on-pitch in the collection include (in the Fire pack) Arsenal’s Alexis Sánchez, PSG’s Neymar, United’s Marcus Rashford and Barca’s Gerard Piqué, while Chelsea’s Eden Hazard, City’s Kevin De Bruyne and Real Madrid’s Sergio Ramos have taken the pitch in the Ice pack, along with Cristiano.

Nike’s Fire & Ice pack is now on sale, head to their website for the full range. Alternatively, the pack is also available via Rebel’s website.