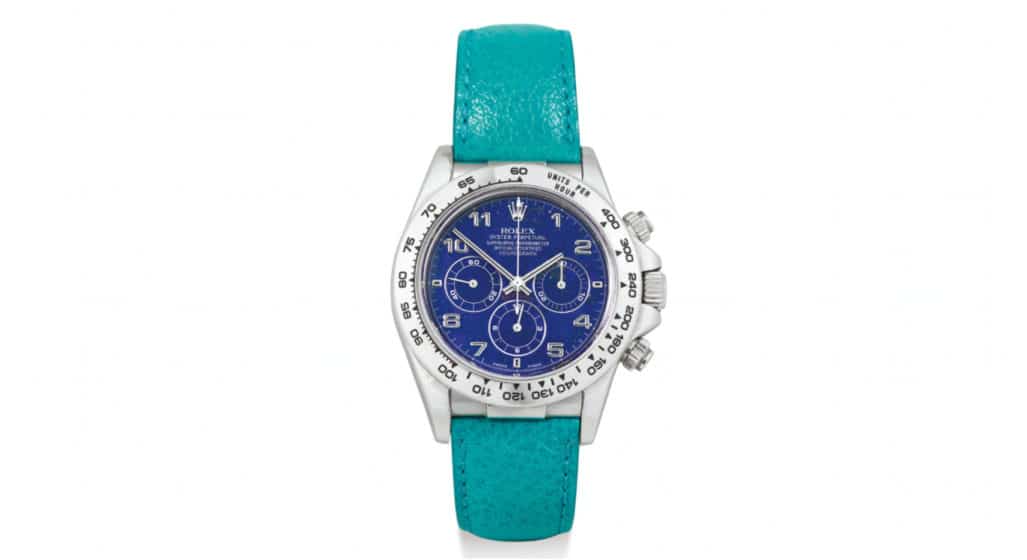 A Rolex Cosmograph Daytona with a showstopping lapis lazuli hard stone dial has been causing quite the stir. Having drawn considerable attention at Sotheby’s most recent auction in Hong Kong, the face that launched a thousand bids sold for US$3.27 million – setting a new world record for automatic Daytonas.

The watch – ref. 16516 – was originally estimated to fetch between US$516,000 to US$1,032,000. In 2018, a similar platinum Daytona also auctioned by Sotheby’s only fetched US$872,100. So you can imagine the eyebrows being raised when it eventually sold for three to six times more than initial expectations.

What makes this particular Rolex special? Apart from being the only known platinum Daytona with a lapis lazuli hard stone dial, this watch is apparently “historically important“. Manufactured around 1999, it places this hot ticket item towards the end of an era when Rolex used Zenith El Primero automatic movements in Daytonas. This cal. 4030 movement also features 31 jewels. And lets not forget just how rare platinum Daytonas are.

It may, however, be some time before a Rolex Daytona tops the world sale record for Daytonas across the board – lapis lazuli dial or otherwise. That honour is still firmly held by Paul Newman’s own manual-wind iteration, which sold for a staggering US$17.75 million at a Phillips auction back in 2017. Then there’s the world record for timepieces full stop, which one intricate Patek Philippe is currently vying for with a US$72 million listed price.