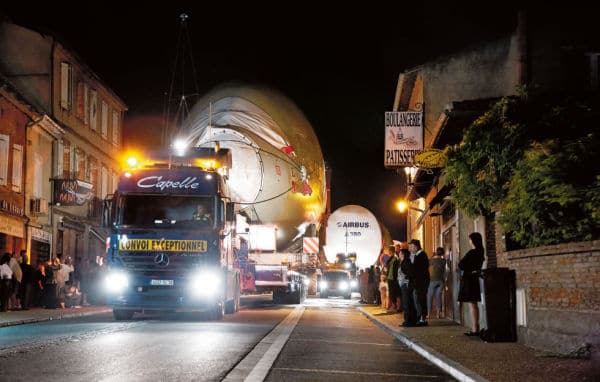 Perhaps I’m just in a strange emotional place right now. But something about watching the last Airbus A380 to ever be made do a final lap on the ground had left me feeling… sentimental.

The world’s largest passenger airplane was transported by an entire convoy of trucks through the French village of Lévignac. This was A380’s unofficial victory lap before its scheduled arrival at the Toulouse Airbus plant for assembly.

The final #A380 convoy drive through the streets of Levignac near Toulouse heads to the final assembly line. 😥 #AvGeek pic.twitter.com/uvWR1StyzV

This parade through Lévignac has been a tradition for some time now. Starting in the early 2000s when the A380 was first manufactured, the entire village would watch as the gargantuan plane made its way through the crowded confines of the urban structures.

Though this has never been a frivolous demonstration by any means. Due to the sheer, ungodly dimensions of the Airbus A380, the components required separate transportation from all over the world to the Toulouse assembly plant. Components which included:

The parts were so large, in fact, that French authorities had to widen roads and modify intersections in order for a viable path.

According to The Points Guy, while this will be the last full convoy, a smaller one will pass through Lévignac before the facility shuts down for good in 2021. This final Airbus A380 will be piloted by Emirates.

The silver lining? Emirates, in addition to other airlines, will keep using A380s for a few years at the very least. So while this firmly closes the chapter to any future generations of baby A380s, we’ll have plenty of time to fully consolidate our feelings before it’s completely phased out.

Singapore Airlines To Open A Restaurant In Airbus A380