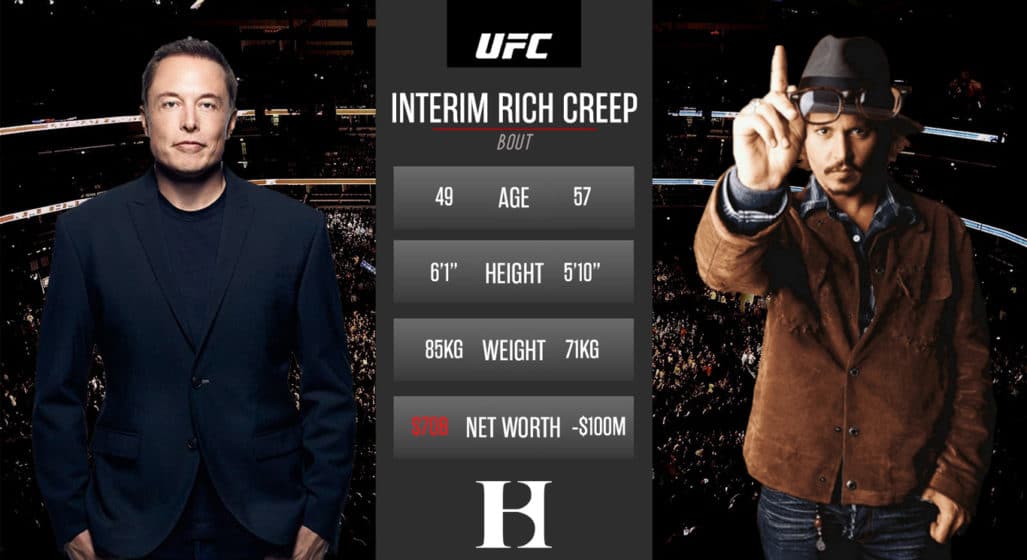 Now usually, we wouldn’t engage with such low-brow tabloid fodder. But in the past few days, a rather intriguing development has occurred vis-a-vis Elon Musk and Johnny Depp. While Musk maintains no such infidelity transpired, this messy slice of drama has caused some friction. Honours besmirched. Good names sullied. Nerves flicked, if you will. It’s all gotten pretty medieval. To the point where Musk publicly issued a “challenge”:

“If Johnny wants a cage fight, just let me know.”

Which is why we’re gathered here today…

While Elon Musk has a physical and biological advantage over Johnny Depp, he’s also – how do I put this delicately – a goddamn nerd. One that I’d wager has never taken a punch in his life. Having grown up with a certain brand of ultra-comfort only afforded to white South-Africans who owned an emerald mine during apartheid, there’s just no way of imagining Musk being “tough” outside of the boardroom.

Depp stands firmly on the other end of the spectrum. While he has now lived a great deal of his life as a Hollywood A-lister, he wasn’t always living in comfort. Dropping out of school at age 12 to tour as a guitarist with rock bands tends to toughen you up real quick. This is clearly a man with nothing to lose – both figuratively and literally given his financial situation.

This is where Musk has an even clearer advantage – the preparation process. Not only does he have virtually unlimited resources to dedicate towards sourcing the most capable experts from around the world; he’s also mates with Joe Rogan. Rogan brings world-class grappling instructors with him such as 10th Planet Jiu-Jitsu founder and no-gi revolutionary, Eddie Bravo, as well as Jean Jacques Machado of the Machado/Gracie dynasty. Rogan himself isn’t exactly a slouch either, having previously coached the mixed martial arts GOAT – Georges St-Pierre – on how to perfect his turning side kick.

Hypothetically speaking, Musk could literally build himself into whatever fighter he pleases. The same way you and I customise a character for some video game profile. +2 boxing, +3 wrestling… I would say +2 disregard for human life – which is necessary for beating another person into physical and mental submission.

Depp, on the other hand, would have less access to expertise but more access to unconventional forces. Forgoing the usual diet and exercise plan of a professional fighter, we see him lighting up enough jazz lettuce to contact the afterlife and enlist the help of the legendary Hunter S. Thompson. Endowed with the mystic forces of Thompson’s sesh-gremlin spirit, there wouldn’t be a single substance on God’s green earth that Depp could not smoke, snort, or inject; nor a beating he could not withstand. Like that star boost from Super Mario Kart… only completely fried.

Just putting it out there – Depp can take a punch. Several, even. If you can handle his calibre of drug and alcohol abuse sustained across 20+ years, you can eat an overhand right from a largely sedentary billionaire CEO approaching his 50s like it’s a fucking tic tac. Leg kicks too. Because you can’t feel pain if you’re zooted out of your mind, hurling towards the fifth dimension.

Musk could always go for the decision, sure, but he risks tiring out and leaving himself vulnerable to a completely unpredictable beating. One that defies all expectations and the entire plane of logic. Meaning his only shot is a clean submission. To minimise the risk of escape, it’ll have to be one which renders Depp unconscious. Rear naked chokes, guillotines, Peruvian neckties, triangles, gogoplatas, hell, even a no-gi ezkiel if he can pull it off. Of course, this all hinges on being able to get close enough before Depp swings.

Punch Musk in the face a bunch of times. That’s it. That’s literally all he has to do. How durable can an engineer’s granola chin be?

While Elon Musk may have the superior:

we simply cannot ignore Johnny Depp’s mongrel stamina developed from years of hard living – a happy consequence of converting oneself into a human pinga (you just know his bloodwork vaguely has the same composition). For that reason, this fight would go the distance – all five rounds.

Musk eventually tires during the third round, at which point Depp unleashes the not-so-inner savage for a horrendous brawl, teeing off like it was 1999 and paparazzi just shoved a camera in his face. Due to his declining health and lack of proper conditioning, however, he wouldn’t be able to finish it. Ultimately earning nothing more than a unanimous decision in his favour.