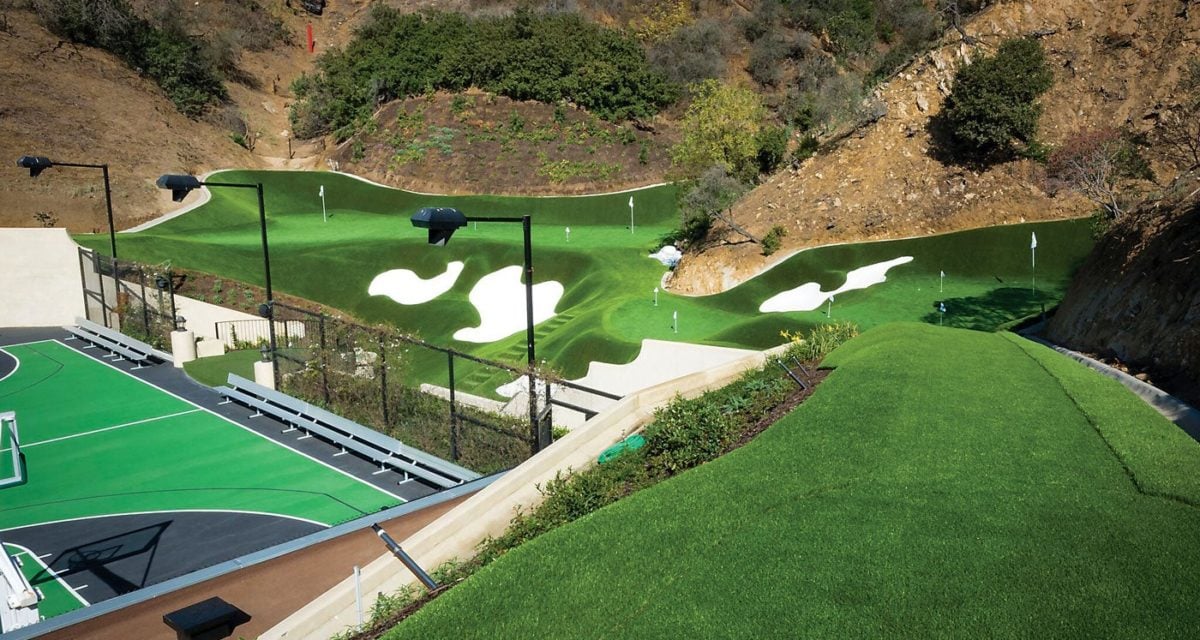 Mark Wahlberg has it all: A-list status, an enviable business empire, and – yes – his very own golf course, which is conveniently located in the backyard of his 30,000 square foot Beverly Hills mansion. Right next to the skatepark, regulation-size basketball court (complete with a Boston Celtics logo), as well as the obligatory swimming pool + waterfalls combo.

The former rapper turned certified thespian’s love for golf is no secret. In fact, when his insanely disciplined daily schedule was revealed back in 2018, a detail that immediately caught the internet’s attention was that Marky Mark hit the green pretty much every single day; right after his post-workout meal and shower, before his post-game snack and cryo-chamber recovery session.

So it’s rather unsurprising to learn that Mark Wahlberg went out of his way to carve out some prime real estate in the old backyard, specifically for the sake of his golf obsession a la Tiger Woods and Phil Mickelson (the latter two professionals also boasting of private courses on their respective properties).

“Shout out to Dominic Nappi and his crew at Back Nine Greens. They built an unbelievable golf practice complex in my backyard.” #BestArtificialTurf

According to Golf, the Boogie Nights actor installed a short-game facility nearly six years ago with the help of Back Nine Greens. The home set-up reportedly features a mini-constellation of rollicking/frenzied greens, deep alabaster bunkers, plus several chipping and pitching areas – accessible via balcony, based on the Instagram post above.

As Casa de Wahlberg is perimetered by canyons, the farthest tee “etched high up on a slope”, playing a little more than 120 yards in total, and is – as you will have already concluded – the stuff of every hack’s dreams. Experiencing all this firsthand is, of course, a privilege reserved for Walhberg’s inner circles, i.e. Abraham Ancer, Flecha Azul, Tom Brady.

Outside of his family home, Mark Wahlberg enjoys being within close proximity of the Riviera Country Club in Pacific Palisades, California. Hailed as being one of the best courses in the US – “with a membership fee of $250,000 to prove it” – given his passion for the game, the bloke has been known to indulge in a cheeky swing there.

“I had dinner with Mark at the end of last year. He was over in Ireland promoting one of his movies. I think I had already made the decision to play here, but he said, ‘I’m a member there and it’s so nice and it’s pure.’,” reveals Rory McIlroy himself.

“He couldn’t say enough good things about the golf course. I went over to see him this morning. I haven’t had a chance to catch up with him yet this week.”

Check out the backyard golf course of Mark Wahlberg below.