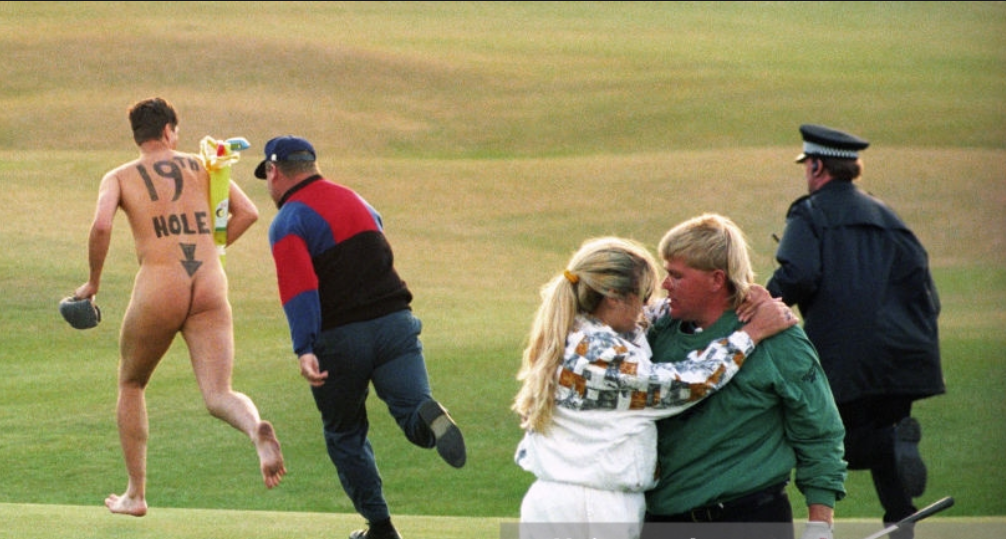 It’s one of the most infamous sporting photos from the 90’s, perhaps – dare we say it – of sporting history.

For Liverpool-born serial streaker Mark Roberts, this nudie run ended up quite a fiasco, though for the man on the day it was just another clothes-free sprint on the books. It just so happened that on this occasion it was immediately after John Daly claimed the British Open at St. Andrew’s in 1995.

It’s almost too hard to fathom as I write this, but Roberts has impressively recorded more than 500 streaks in over 13 countries since his 1993 debut at the Hong Kong Rugby Sevens. Speaking with Golf.com during their 2009 interview with the legend, the Brit recounted his escapade across the field at one of the world’s rowdiest sporting occasions – which was also his first time whipping it out for the world to see.

“I worked in a bar in Hong Kong 14 years ago during the Sevens.” Roberts told them. “There was a girl who streaked on the Saturday and I said to me friends, “Oh, come on, anybody can streak.” I had no intention of doing it, but the next day I had a couple more beers. I went into the stadium and it was like a carnival; everybody was dancing and singing – it was fantastic. So when the game started I jumped on the pitch, took the ball from the best rugby team in the world (the New Zealand All Blacks) and scored a try. The whole stadium started screaming their heads off, cheering like mad. Even the All Blacks rugby team started to clap.”

The now 51-year-old has since amassed a very comprehensive rap sheet, one that even boasts events away from the sporting calendar, including the likes of a Miss World contest, a Mr. Universe contest, the running of the bulls in Pamplona and even a morning TV show.

With the turn of the century, Roberts looked to taking his streaking career across the pond, most notably flying to San Diego in 2003 with a plan to streak at Super Bowl XXXVII. He couldn’t get a hold of tickets in time, though he returned a year later to the NFL final in Houston, Texas. Just prior to the second half commencing, Roberts ran onto the field disguised as a referee, stripped down and performed a dance wearing only a thong. He copped a tackle from New England Pats and Carolina Panthers players, as well as a hefty stack on by police and security. The following year he was dealt with a $1000 fine for trespassing, which seemed to be the usual outcome for Roberts during his career, but the Yanks definitely proved much harder on the wallet.

His grand retirement plans centred around the 2006 World Cup Final in Germany, but he struggled to execute after being spotted by security. Rumour has it that he was so prolific at European football matches that he was required to submit his passport every time he travelled to an away game with the English team. Despite faced with a growingly switched on law enforcement, Mark Roberts valiantly continued until his eventual retirement in 2013.

But he wasn’t quite done yet. Capitalising on his since dormant public figure, Mark Roberts decide to return to the limelight in a spectacular fashion just this year when the 2018 Winter Olympic Games found themselves in Pyeongchang, South Korea. The man took to the ice in nothing but a pink tutu and with the words “peace and love” across his chest at Gangneung Oval as the men’s 1,000-metre speed skating medal ceremony concluded.

We could honestly write an actual book on Roberts’ escapades across the two decades, and who knows, maybe one day we will. Until then, let’s jump back to that iconic moment he shared with John Daly back in ’95, and let the man himself recount the events for you.

“I arrived at St Andrew’s on the day of the [British] Open with three friends. We had driven up in a car, as the shopping trolley we had hijacked, had collapsed under our weight.”

“When we got there we couldn’t find a parking space until we asked someone who was directing cars into a car park if there were any spaces left. It turned out that he was a Scouser, like us, charging people £5 to get into a free car park and showed us a spot in the corner. We got talking and when I told him what I was going to do later that day, he asked if he could chase me and get in on it? I agreed, as he was obviously overweight and could run no further than his top lip! Before the event, we all went out and had a laugh before bunking in and getting a decent vantage point. While we were waiting, I noticed ex-President George Bush and Prince Andrew on a balcony. This got my attention, so I decided to get their attention in other ways a bit later on.”

“As the tournament drew to its climax, my friends gathered around me, so I could get undressed without attracting the attention of the Beverly Hillbillies [cops] and half the cast of Baywatch around us and we were amazed at how big it was (my belly). I had to tell them that it was my disguise, as people know me normally as a virile young athlete in my prime!”

“As John Daly approached the 18th green, I got ready and put on a cloth cap that I had found at an allotment in Maidenhead and a set of kids plastic golf clubs from the crazy golf championship that I had won at Disneyland. Gary, one of my mates, had earlier etched onto my back, with a compass and marker pen, ”19th HOLE” and drew an arrow pointing to my bum. As John Daly putted the ball, therefore winning the tournament, I jumped over the barrier and proceeded to run towards him. As I did, his wife ran to him and gave him a hug. This threw me a bit, as I had wanted to shake his putting glove, and as he has a reputation for swinging at people as well as balls, I decided I wanted him swinging at neither! So I ran past him, followed by my new found mate who gave us the parking space.”

“As I ran, I seemed to gather pace because of the hills and slopes on the course. When I looked around, I was being chased by my new mate and the cast from Benny Hill. All the police who had come after me were running in a straight line; about four of them in total. I couldn’t help laughing as I ran, especially when I heard my mate say ”slow down will you?” I turned around again and saw him going red in the face, sweat pouring off him, as well as the police, and then saw George Bush and Prince Andrew clap and cheer as I ran past.”

“After I motioned to them that I would meet them in the bar when they let me out, I thought of my friend and broke my pace before he had a heart attack. He then rugby tackled me and, when I got up, slapped me in the face! ”YOU BASTARD” he said. ”I could have died then!” He grinned before I was grabbed by the cops and hauled off to rapturous applause.”

“I was then taken to the local police station and held overnight, before going in front of the ‘Sheriff ‘(as they’re known in Scotland) in the morning. I was appointed a local solicitor who didn’t have a clue and was nearly remanded to Barlinny prison for psychiatric reports, before eventually being fined £250! As I walked away from the dock, the Sheriff suggested that I seek help, to which I replied ”Any chance of getting the number of your psychiatrist Your Honour?” before leaving sharply through the exit!”

“A photo of this streak is now on the front cover of a sporting comedy themed book, aptly titled, ‘THE 19th HOLE’!” 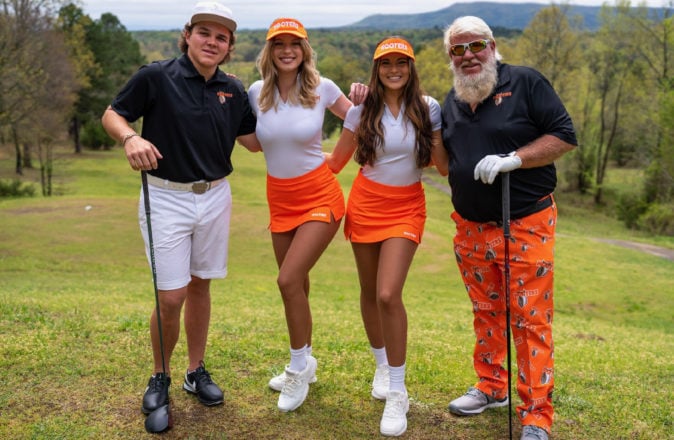 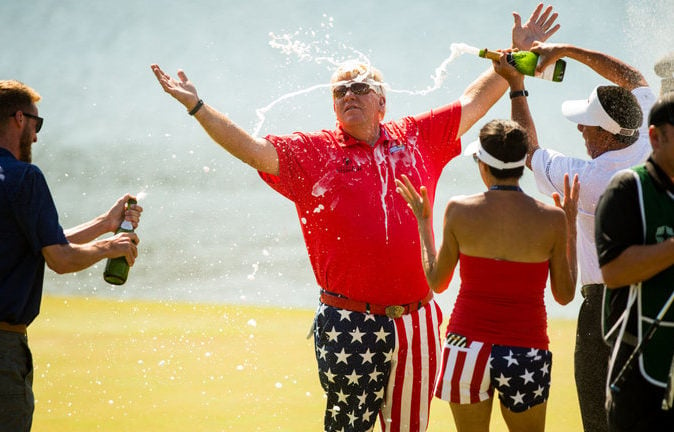