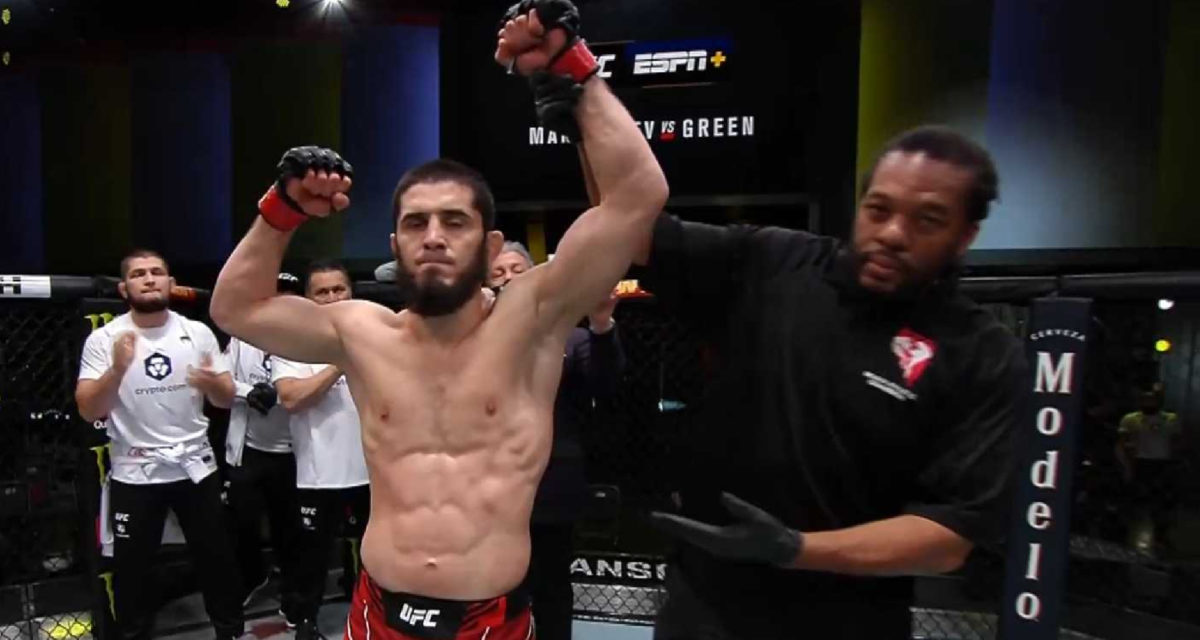 UPDATE [8/03/22]: After turning down the last-minute offer to face Rafael Dos Anjos at UFC 272, Islam Makhachev is once again on the collision course for Beneil Dariush in his next fight; the latter currently recovering from a leg injury that prevented him from taking on the former during the most recent scheduled Fight Night. Suffice it to say, Makhachev’s coach, longtime friend, and undefeated MMA legend in his own right – Khabib Nurmagomedov – isn’t too happy about UFC President Dana White reneging on his earlier confirmation. Should the Dagestani contender prevail, then he’ll receive a title shot against the winner of UFC 274: Charles Oliveira vs Justin Gaethje.

After yet another dominant first-round victory during last weekend’s UFC Fight Night in Las Vegas – this time against Bobby Green in place of an injured Beneil Dariush – rising MMA star Islam Makhachev has revealed his next fight will be for the lightweight belt.

“Four-win streak, I have this last 11 months… Dana [White] just called Khabib [Nurmagomedov] and said [Islam Makhachev] is gonna fight for the title next.”

The date, on the other hand, hinges upon whether UFC 274: Charles Oliveira vs Justin Gaethje goes according to plan – meaning Islam Makhachev will likely receive his long-awaited title shot by year’s end (November to December 2022); while the opponent will obviously be determined by whoever prevails between the reigning UFC Lightweight Champion in Oliveira (32-8) and the #1 challenger in Gaethje (23-3).

Speaking with Megan Olivi, Makhachev’s coach, longtime friend, and undefeated MMA legend in his own right – Khabib Nurmagomedov – offered some insight regarding his protege’s potential match up (and by extension, the winner of UFC 274).

“Ah, this is a hard question. If I say I believe Justin Gaethje gonna win [at UFC 274], then maybe people think, ‘Oh I fight with him, that’s why I want him.’ Something like this,” explains Khabib Nurmagomedov, who defeated the American in decisive fashion during his final UFC title defence before retiring.

“For UFC, it’s gonna be better if Charles Oliveira wins. 11-win streak versus 10-win streak. Two new blood for lightweight division. And I really want Charles and Islam to fight, you know?”

Given how Islam Makhachev has now finished his past four fights, including:

… bringing the tally to 14 finishes out of his 22 professional fights, if we follow the ongoing statistical trend, securing a finish shouldn’t be a problem. Of course, it’d be exceedingly foolish to discount the sheer calibre of both Oliveira and Gaethje in favour of the hype train.

Recently, Islam Makhachev himself stated how he likes his chances against Do Bronx.

“I don’t think it’s going to be hard for me. I can take him down easy because I know he doesn’t have good wrestling skills. But his grappling skills high level and we will see who is better there.”

Precisely who Islam Makhachev will face in his next fight will be confirmed once and for all at UFC 274: Charles Oliveira vs Justin Gaethje come May 7th of 2022