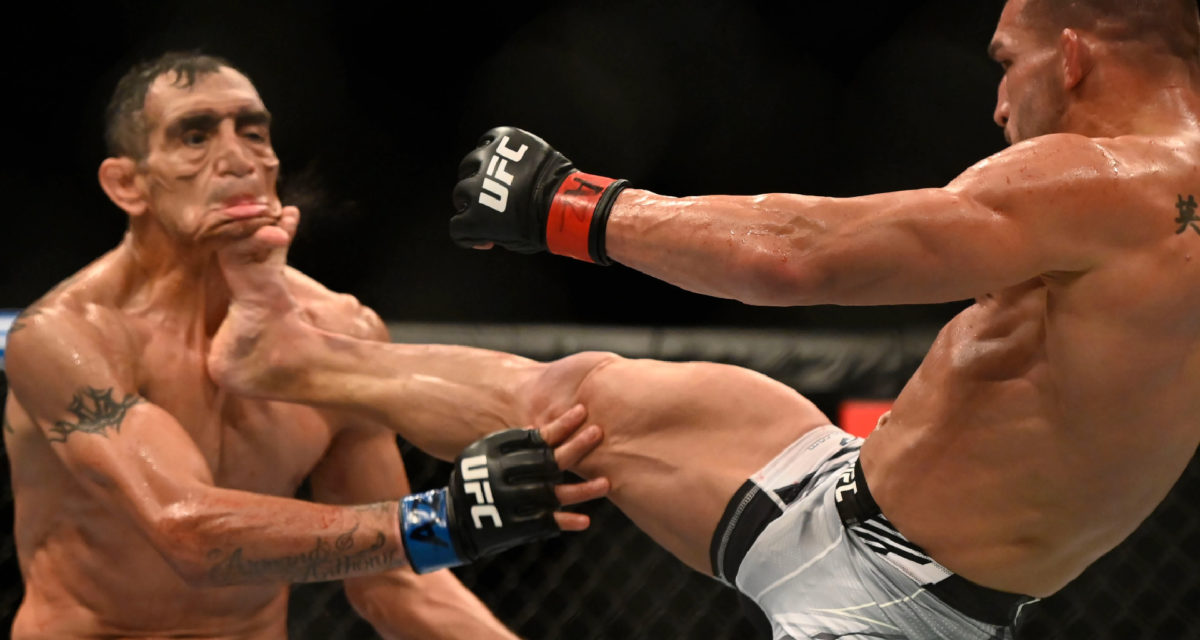 The tale of Tony Ferguson has always been one of tragedy. A phenomenal combat sports talent who came within inches of claiming the UFC’s lightweight throne only to have the interim honour unceremoniously stripped from him due to injury. Under any other circumstance, the 12-fight win streak he accomplished between 2013 and 2019 would have earned him all the glory within this cutthroat division of mixed martial arts. Instead, he was fed to a new generation of lions, publicly executed for pay-per-view buys. And now, as Tony Ferguson stumbles through the twilight years of his career – and in the wake of his very first knockout defeat at this past weekend’s UFC 274, courtesy of Michael Chandler – it might be time for the seasoned veteran to retire.

I could sit here and wax poetic about El Cucuy’s finest moments across 32 hard-fought bouts until the cows came home. I could even lament the thrice-cancelled face-off that never was between him and the unparalleled Khabib Nurmagomedov. That would, however, be missing the point entirely. No one is disputing the 38-year-old pugilist’s legendary exploits. Everyone knows they were legendary. They are legendary. And if the last four fights are an indication of anything, it’s that the conversation needs to change. This is no longer a matter of pride and certainly not a matter of holding onto Hollywood-esque delusions involving a rebound fuelled by decades of Rocky instalments. This is a matter of reality. Of a professional athlete’s declining health in the face of increasingly brutal competition.

The turning point occurred two years prior at UFC 249, wherein Tony Ferguson came to blows with the notoriously heavy-handed Justin Gaethje for the interim UFC Lightweight Championship on short notice. For five gruelling rounds, Ferguson would absorb an inhuman amount of punishment, punch drunk and slipping in/out of consciousness. His power shots were cutting air while his Gaethje’s cut to the chase, more and more from the latter going by unanswered as the minutes lapsed. With roughly a minute and 20 seconds left on the clock, referee Herb Dean stopped what had long ceased to be entertainment and began to resemble a live snuff film taping.

There are some losses that you just don’t recover from. Chuck Liddell had Quentin Jackson. Anderson Silva had Chris Weidman (back-to-back). Chris Weidman had Luke Rockhold. Justin Gaethje was, without a doubt, the undoing of Tony Ferguson. The latter would showcase physical signs of a damaged body and brain in his next two fights against the “uncrowned” King of the UFC Lightweights Charles Oliveira at UFC 256 first, #4 ranked division contender Beneil Dariush at UFC 262 second. With a noticeable decrease in athleticism and the unorthodox flair which previously gave him an edge over his opponents, Oliveria and Dariush would expose something else: a disturbing lack of sound fundamentals. Taken to the ground, he surrendered control for the majority of both fights and appeared helpless beyond belief.

Tony Ferguson simply wouldn’t be Tony Ferguson if he had even a single iota of quit in his DNA (or chose to retire after a trio of consecutive losses). So battered, bruised, and bloody, he saddled up against a former three-time Bellator champion in Michael Chandler only to kiss canvas during the early seconds of Round 2. Stiff posture. Feet frozen in separate directions. Out cold for a full minute. Many – present company included – assumed the worst when the broadcast refused to replay the moment until they could actually confirm he was still with us. At this point, I can hear you telling me he “looked good in Round 1” and it “could’ve gone either way.” But one good round doesn’t prevent years from being shaved off your lifespan if you sustain damage to this level immediately after.

The lesson here? You can beat all the elite 155-pounders in the world; time remains undefeated. The Boogeyman may be no more, but as fight fans, we’ll be forever grateful to one of the Octagon’s wildest contenders, who gave us his best years while never asking for anything in return.