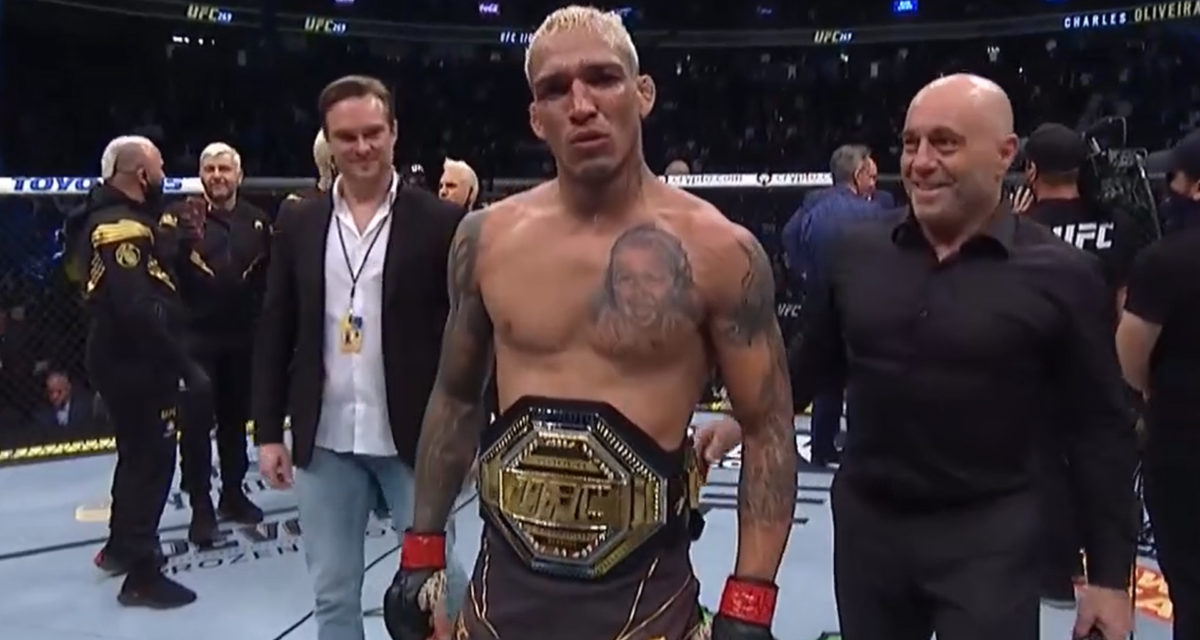 It was only fitting that the UFC’s blockbuster year punctuated itself with a main event involving #1 ranked lightweight contender Dustin Poirier. The Louisiana native had effectively set the tone for 2021 with his upset victory against Conor McGregor back in January, hailing the arrival of several more headline-making + highlight-worthy upsets to come. In a twist of fate, however, UFC 269: Charles Oliveira vs Dustin Poirier would not conclude in the latter’s favour. As we’ve said time after time, the MMA gods may favour a fighter on the odd occasion, but ultimately, they have no love for those who offer them blood sacrifices.

The preceding co-main event could’ve conceivably been interpreted as an omen. Two-division women’s champion and overwhelming favourite (-1000 Vegas betting odds), Amanda Nunes, had stepped into the cage with the world on her side. Throughout the first round, she proved remarkably dominant against her bantamweight opponent, Julianna Pena, knocking her to the canvas and logging nearly four minutes of control time. In a historic upset, however, Pena would survive to see Round 2, weathering the storm on her feet, eventually taking Nunes to the ground, and sinking in a rear-naked choke. The Lioness had been dethroned.

Setting aside Amanda Nunes vs Julianna Pena, the bout between Charles “Dos Bronx” Oliveira and Dustin Poirier at UFC 269 had been eerily reminiscent of the former’s title fight against Michael Chandler at UFC 262. During the opening round, it appeared as though Oliveira was being picked apart on his feet. Similar to what we witnessed back in May, at one stage, it seemed as though the clinic would soon put Oliveira out of commission. Even in the eyes of the most untrained punter, it was clear Poirier was the more technical boxer with noticeably heavier hands.

Round 2 saw Oliveira crank up the aggression factor, getting busy with his hands, feet, and everything else in between before managing to tie Poirier up in a clinch against the fence. After a failed armbar and omoplata attempt by Oliveira, Poirier would roll forward, extending an open invitation to his closed guard. And you certainly didn’t have to tell Oliveira twice. He’d asked for no quarter and offered none in return. From that moment forward until the air horn was sounded off, Oliveira chiselled away at The Diamond from top position using nasty elbows you wouldn’t wish on your worst enemy.

Round 3. Both fighters had squared away a round on the scorecards each with three more to go. Though we’d only be treated another four minutes of action. Sensing he’d worn Poirier down, Oliveira reverted to his submission artist ways. Pressing his opponent against the fence once more, he’d slip Poirier’s left arm to take the back. That’s when the poetry practically wrote itself. Charles Oliveira – the boy from the favelas who defied all odds from medical, economic, to professional; and tonight, both the Vegas betting odds and a lopsided first round – would lock up a standing rear-naked choke to retain his hard-earned belt.

We’re living in an electrifying new era of the UFC lightweight division.

Side Note: If you’re having a shitty weekend, just know some poor bastard lost over $300,000 betting on Amanda Nunes at UFC 269 when the total payout only would’ve amounted to $25,000.