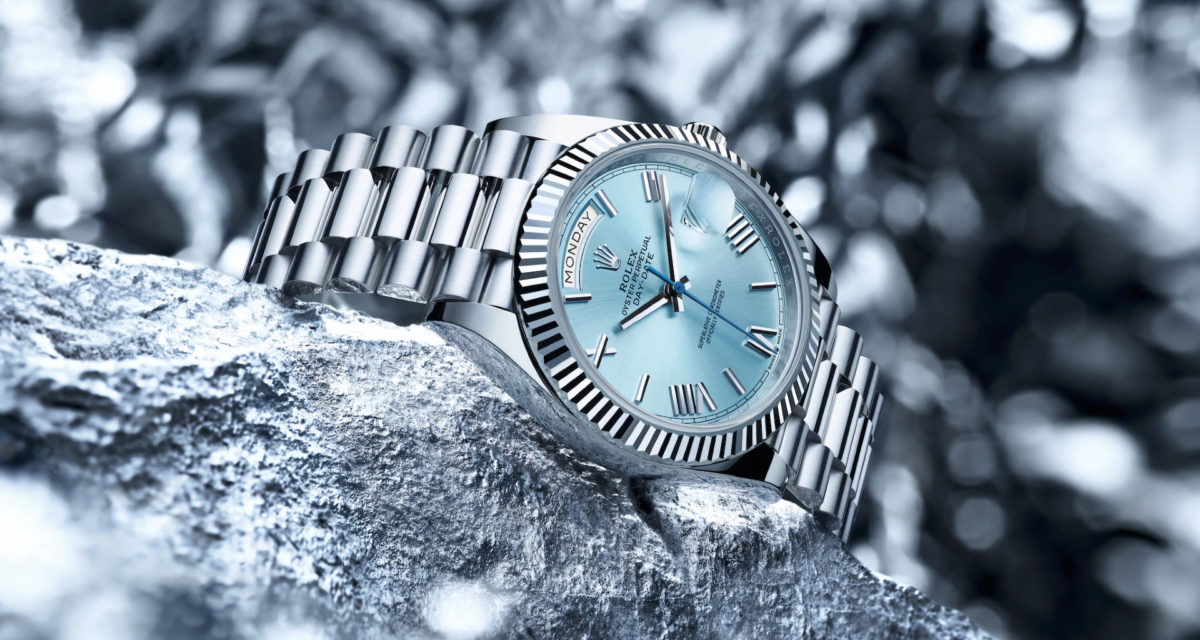 There are some watches that feel important, as soon as you have them in your hands. The Rolex Day-Date 40mm in platinum is one of those watches, which was somewhat of a surprise when I first picked it up at Watches & Wonders 2022 last month.

On the first morning of the show, I knew immediately when Rolex’s new releases had been announced, as for most of the day, my entire Instagram feed was an unrelenting stream of left-handed travel watches. Occasionally, I’d see a post about another new reference from Rolex, like the falcon’s eye stone dial Yacht-Master, or the subtly updated Air King, but that was about it.

As a result, when the time came for my appointment to see the new Rolex novelties in the metal, I was most curious about the green/black GMT Master-II, and not too much else. To my surprise, I left the meeting thinking about a watch that no one seemed to be talking about, and one which I haven’t managed to stop thinking about since: the Rolex Day-Date 40mm in platinum.

RELATED: Michael Caine’s Record-Breaking Rolex Proves He Was Ahead Of His Time

There’s an undeniable gravitas the Day-Date wields in our collective imagination, as an object of culture as much as it is horology. It’s the president’s watch, the money manager’s watch, and the gangster’s watch (even the Dalai Lama loves his Day-Date), but above all else, it’s the “I’ve made it” watch.

Perhaps only the Rolex Submariner could challenge it as being more recognisable to the man on the street, but thanks to its fluted bezel and case and bracelet cast in precious metal, the Day-Date exerts heftier cultural clout. Some might think of the Day-Date as the geriatric’s watch of choice, but if that’s as far as they’ve gotten, they haven’t thought about it enough.

Rolex traditionalists have a fair claim to reject the larger modern case size in favour of the original 36mm case size. However, the slightly less familiar shape of the 40mm Day-Date case when compared to the so-called maxi-case Submariner, is infinitely more comfortable thanks to its more thoughtfully ergonomic design. It’s by no means a small watch at 40mm, especially in the case of the weighty platinum edition, but it’s certainly not unwearable by any stretch of the imagination.

The undeniable heft of the 950 platinum case and bracelet are a significant part of what makes the reference 228236 such an impressive watch in the metal. It’s impossible not to have a flicker of surprise pass through your mind the moment you first feel its weight, as its colourless metal looks enough like steel that you’re expecting something so much lighter.

What makes the case of this Day-Date different to previous years? You only need to look at the freshly fluted bezel, which is an important change from the smooth bezels of previous years. While some might prefer the smooth bezel of the old platinum Day-Dates, I’ve always found it hard to appreciate as the fluted bezel is one of the defining characteristics of the Day-Date design.

Why has it taken until 2022 to get a fluted bezel on the platinum Day-Date? Apparently, it hasn’t been technically achievable at scale and to Rolex’s specifications until now. This makes sense, given how dense platinum is as a material, and how the bezel is a relatively delicate piece of metal to craft with such specific angles and with such a high degree of polish.

The bezel isn’t the only place you’ll find those glinting facets though, with the dial of the 40mm Day-Date boasting a set of Roman numeral hour markers that have been constructed with the same hard angles. As always with platinum watches from Rolex, the dial is icy blue, with a light blued seconds hand and a date window highlighted by the cyclops magnifier in the sapphire crystal covering the dial.

Beneath the dial is the Rolex calibre 3255, which promises an accuracy of +/-2 seconds per day and offers a respectable 70 hours of power reserve. Regulate by the proprietary Chronergy escapement, it features a Parachrom hairspring and Paraflex shock absorbers.

It’s true, this probably isn’t the most novel Rolex release of 2022. Likewise, the updates to this watch aren’t as significant as what you’ll find in something like the left-handed GMT Master-II. However, nearly a couple of months after first holding it in my hands in Geneva, it’s still one of the watches I’ve thought about the most since and was without a doubt a personal favourite of the entire event.

It’s hard to put a finger on exactly why that is, but it’s got something to do with such an iconic design cue arriving on the most precious expression of the Day-Date that Rolex makes (obviously not including gem-set versions). The Day-Date is a special watch in the history of wristwatches and it’s a special watch in the history of Rolex. Add platinum into that mix, as well as the all-important fluted bezel and you’ve got a watch that almost has its own gravitational pull.

As with so most Rolex watches, you’ll need to be fortunate to see one in the metal, let alone find one available for sale, but if you do it comes with an RRP of $89,350. Yes, that’s a lot of money, but with the Rolex Day-Date 40mm in platinum, you’re getting a hell of a lot of watch for it.