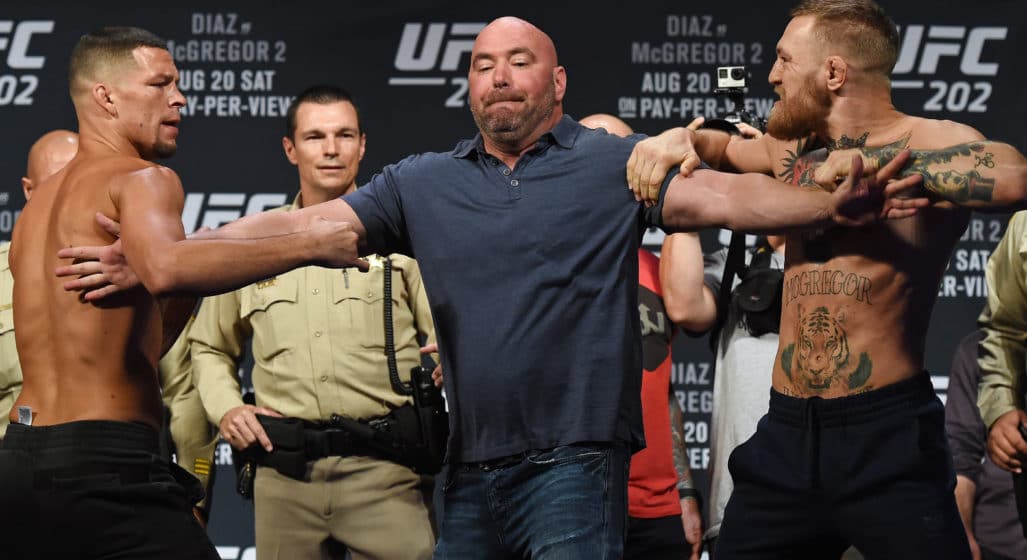 The very mention of the UFC in the present day conjures up visions of a wildly successful combat sport network complete with:

But there was a time when that wasn’t the case.

In fact, there was a time where it was facing a more dire fate… which is how Dana White, business partners Lorenzo and Frank Fertitta were able to acquire the whole enchilada for a relatively paltry US$2 million. Paltry because as of 2019 – the UFC is valued at over US$7 billion.

The year was 2001. White had just spent the last few years receiving a firsthand education in the world of combat sports and combat sports promotion after ditching his gig as a bellman. White had also just fled Boston to avoid the Irish Mob. But that’s another story which you can also take the time to hear in the video linked below.

At this point in time, White was managing talent such as Tito Ortiz and Chuck Liddell. During a negotiation between himself and former owner Bob Meyrowitz regarding Ortiz’s future contract, Meyrowitz “flipped out”.

“There is no more money – you can’t get any more money from me,” White recounts Meyrowitz telling him.

“I don’t even know if I have enough money to do the next event.”

That was just enough of a fire being lit under White’s ass to get him moving. After he hung up the phone, he began dialling someone else. Someone he knew would be able to back him. He called his billionaire buddy Lorenzo Fertitta and gave him the full debrief.

“I just got off the phone with Bob Meyrowitz… I think he’s in trouble. And I think we can buy him, and I think we should.”

“A month later we bought the UFC for US$2 million.”

It was a decisive move comprised of equal parts daring and open opportunity that would change White’s life forever. No longer just another pawn in talent management or a humble promoter.

White became the President of the UFC with a considerable 10% stake in the company. It wasn’t, however, happily ever after right there and then.

Fighting an uphill battle against social panic surrounding televised violence, encroaching regulations regarding health and safety that would limit the action, encroaching regulations regarding its ability to be pay-per-viewed, as well as the company’s existing financial circumstance – there was still plenty of work to be done. In fact, it the UFC would continue to burn through several tens of millions in funding before they saw the upside.

White would take the reins in the UFC’s most crucial stage, vertically integrating The Ultimate Fighter reality series to scout for more era-defining talent, breaking through onto the other side to rake in that sweet pay-per-view money, and ramping up the entire operation to the juggernaut level we know today.

In 2016, the UFC was sold for over US$4 billion – the largest acquisition in sporting history. This brought White’s stake to around US$360 million. Through a lucrative multi-year broadcast deal with ESPN, White would later increase the UFC’s value to a total of US$7 billion in 2019.