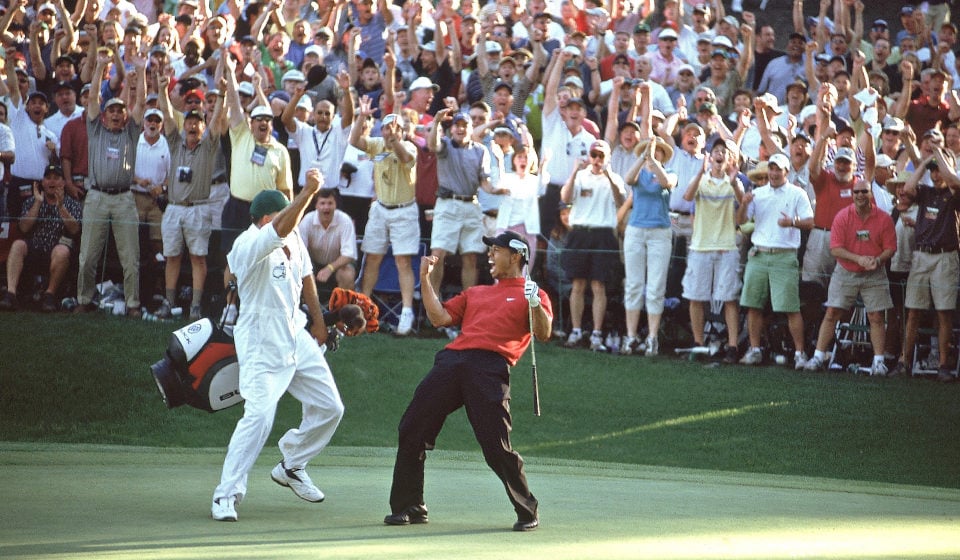 For any golf fan, The Masters at Augusta is the holy grail of the sport, where the best of the best vie for the most coveted prize in golf, the green jacket. Simply put, it’s the pinnacle of golf and a place where time and time again the cream rises to the top. All these factors make it the perfect venue for some of the most dramatic shots in golf, here are our picks for the 5 greatest masters shots this century (since 2000).

Starting in the second last pairing of the final day with fellow Australian Marc Leishman, and in miserable conditions, Scott shared the lead with overnight leader Angel Cabrera coming down 18. His second shot landed safely on the green but was 25 feet away from an unlikely birdie. In one of the most clutch putts in Masters history, Scott drained the putt that just caught the low side of the hole. The now famous cry of “C’mon Aussie,” ensued afterward. However, Cabrera answered back with a birdie of his own to force a play-off. On the second play-off hole, Scott went on to win and become the first Australian to wear the coveted green jacket. See the full action below.

Ending 72 holes tied for the lead with Louis Oosthuizen, Bubba and Louis were forced into a sudden death play-off. Carding regulation pars on the first play-off hole, they proceeded to the par-4 10th. Both men drove the ball poorly but Bubba’s was the worse of the two. He pulled his drive deep in the trees and straw and seemed unlikely to even scramble a par. From 163 yards out using a wedge, Bubba unleashed a huge hook that landed, spun and settled ten feet from the hole. “I hit my 52-degree gap-wedge, hooked it about 40 yards, hit it about 15 feet off the ground until it got underneath the tree and then it started rising – pretty easy.” Louis made bogey, giving Bubba the opportunity to two-putt for the win. He tapped in the second to win the 2012 Masters.

He may have finished runner up in 2012 but in the final round, Louis hit one of the most remarkable shots in the history of the tournament. The South African was 253 yards away playing his second into the par-5 2nd. The four-iron landed safely on the front edge many moons from the hole. It proceeded to snake its way towards the pin and dropped. For only the fourth time in the tournament’s history had an albatross (or double eagle) been recorded for what is the rarest score in golf.

Holding a two-shot lead going into the 13th hole, Phil drove the ball right and it nestled in the pine straw. Phil has always been known for his Houdini-type escapes but this was living dangerously on the edge. With two pine trees, a creek and 207 yards between him and the hole, Mickelson struck a towering six-iron that stuck on the green less than ten feet from the hole. He subsequently missed the ensuing eagle putt but tapped in for birdie. “The greatest shot of his life,” led to a final round 67 and a third green jacket.

In the midst of a final round collapse and trailing Chris DiMarco going into the par-3 16th. Woods pulled his eight-iron left of the green, where it came to rest on the collar of the first cut of rough. What came next was one of the most distinguished shots of Woods’s career. After surveying the lie of the land, he opted for a low, spinning pitch landing 25-feet above the hole. The ball bit and trickled down towards the cup. “Oh, my goodness,” Lundquist gasped. The ball stopped, hung briefly on the edge of the hole with the famous Nike tick in all its glory. With a little bit of help from the golfing gods or gravity, the ball dropped in for birdie. “Oh wow, Lundquist bellowed. “In your life have you seen anything like that?” Woods went on to win in a one-hole playoff and collected his fourth jacket.