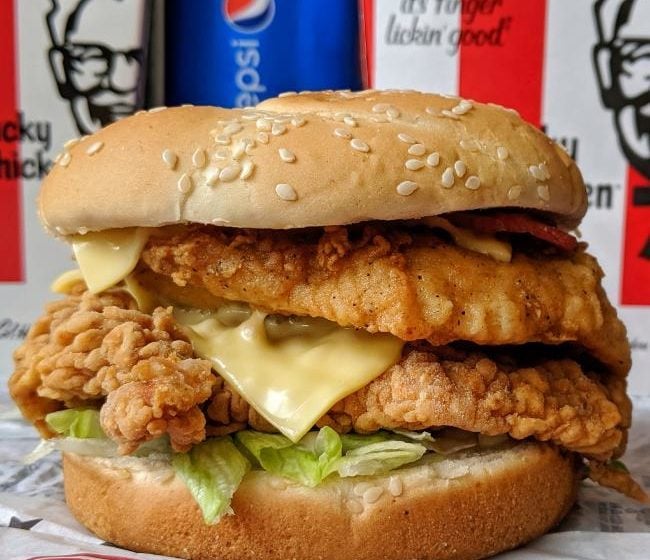 You’re not alone if you love a greasy KFC burger when you’re hungover, but it’s often hard to choose between an Original Recipe or Zinger fillet burger. Well now you can have both with the addition of the Hot or Not Burger to the Colonel’s secret menu.

Along with an Original Recipe and Zinger fillet between two buns, the mouth-watering burger contains a fiery supercharged sauce, mayo, cheese, bacon and lettuce.

“We know how much our fans love a Zinger Burger, but not everyone’s tastebuds can commit to its spiciness,” said Kristi Woolrych, KFC Australia’s chief marketing officer. “The Original Fillet and mayo will help cool down the spice of the Zinger and supercharged sauce, for those who quite can’t handle the spicy flavour hit.”

🚩🚩 @kfcaustralia 🚩🚩 🤳 OCTOBER IN-APP SECRET MENU: HOT OR NOT SPICY FRIED CHICKEN BURGER 🤳 .
NEWS JUST IN – today's the first of October and while that ISNT a secret, KFC’s new October in-app special is! That's right it's hidden! I've got the link to download the app in my bio if you wanna go have a look. I was fortunate enough to visit KFC HQ yesterday for a pre-screening of this month's special and it was a banger…the Hot or Not! The combo of a Zinger Fillet with spicy sauce and Original Fillet with mayo allows for basic people who can’t handle the heat to still enjoy the Colonel’s Zinger goodness. In fact – tag the most basic person you know who isn’t good with spice and must be put to the test to see if they can eat this bad boy and enjoy it! 😅 .
#kfcaustralia #kfc #ad #sponsored #kentuckyfriedchicken #secretmenu #downloadtheapp #october #hotornot #spicy #friedchicken #secret #hidden #prescreening #creamy #mild #basicpeople #badboy #fastfood #techsavvy #chewcrewmedia #teampixel

Retailing for $8.95, the Hot or Not joins a tasty range of items on KFC’s Secret Menu that includes the Zinger Chipster (a Zinger wrap filled with chips), the Kentucky Snack Pack (chips topped with Popcorn Chicken and firey supercharge sauce) and the Slide Burger (a burger with pita bread instead of buns).

Accessible only via the KFC app, you can reach the secret menu by downloading the app, selecting your nearest store and tapping “order”. When the menu appears, drag the screen down and a cartoon Colonel Sanders will appear. Hold the screen for 11 seconds and the secret menu will appear, allowing you to order all the Colonel’s hidden items.

The KFC secret menu is available Australia wide for the remainder of 2019.