The Legacy Of J.R.R. Tolkien, A History Of ‘The Lord Of The Rings’ Author 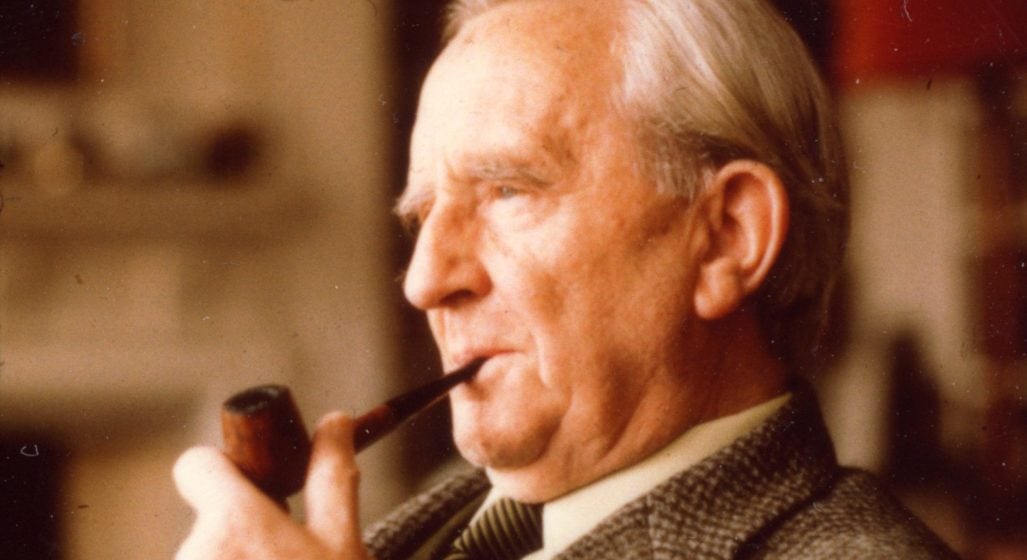 J.R.R. Tolkien is the undisputed master of high-fantasy. The Hobbit and The Lord of the Rings have sold countless millions of copies across the world, and continue to do so today – nearly half a century after their authors’ death. But what separates J.R.R. Tolkien from the average novel writer is his ability not to create just fiction, but mythology. His works are at home with the classics such as the Iliad, the Odyssey, and Beowulf. The stories of Frodo and Bilbo Baggins are the metaphorical stories of us all – we may not battle Balrogs, befriend Elves, or become ring-bearers, but we each face our own individual struggle in one way or another. Tolkien’s character was that of the classical gentleman and scholar. Through his faith, his love for family, and his intellect, the modern world is a better place.

The Life Of J.R.R. Tolkien

John Ronald Reuel Tolkien was born to Arthur Reuel and Mabel Tolkien on January 3rd, 1892 in South Africa. Tolkien’s father died when young Ronald was only 3, the same age he returned to his native land of England. 9 years later, J.R.R. Tolkien lost his mother. Before her death, Tolkien’s mother successfully encouraged her young son to become a good and wholesome young man. Sarehole, where the small family lived for some time, became the inspiration for The Shire, with its rolling green hills and traditional architecture. Mabel taught her son botany and language, which sparked Tolkien’s love for nature and literature. Perhaps most importantly of all, the small family converted to Catholicism,  heavily shaping Tolkien’s view on this earth and Middle-earth. Tolkien’s faith was enhanced after the death of his mother, as the local priest took the orphan in.

J.R.R. Tolkien had love for literature and language that granted him a long and successful career at Oxford – a career only disturbed by both the First and Second World Wars. During his later teenage years, Tolkien fell for a woman named Edith, who eventually became his wife. Years later, when the young academic offered his hand in marriage, he learnt that Edith had already accepted the offer of another. Despite this, the two eloped in the coming years and their forbidden love inspired Tolkien’s story of Lúthien and Beren – a Man and an Elvish woman who were denied love through the restraint of Beren’s impending mortality. Edith and Tolkien would bring four children into the world.

Beren and Lúthien – Inspired by the Tolkiens’ forbidden love.

During his time as a professor and fellow at Oxford, J.R.R. Tolkien published The Hobbit in 1937 and The Lord of the Rings trilogy across 1954 and 1955 to critical acclaim. Tolkien passed away in 1973 and was buried next to his love, Edith.

Today, The Lord of the Rings is a household name, known globally as the highest standard of fantasy writing. But it was The Hobbit, initially marketed as a children’s book, that first won J.R.R. Tolkien his title as fantasy author.

The Hobbit follows the tale of Bilbo, a young Hobbit whose cosy lifestyle in The Shire is rudely interrupted by a party of Dwarves and a wizard. It is a story of challenge and triumph, as a small being must take on an endlessly large world and face the evils that fill it. It is a tale as old as time itself: a hero is called to adventure; the hero faces a series of trials of growth; the hero triumphs, against hopeless odds, and the world can return to neutrality. The three classics I mentioned earlier, the Iliad, the Odyssey, and Beowulf all boast these tropes. Modern stories such as Star Wars and A Song of Ice and Fire (AKA Game of Thrones) have modernised this eternal Hero’s Journey. This is what makes The Hobbit so special – it is a retelling of a metaphorical story told throughout all cultures and time periods. Therefore – more than just a children’s book – Tolkien’s first novel is a stepping stone of literature and culture on a path that stretches back countless generations.

The Lord of the Rings took the literary tropes made visible in The Hobbit, and emphasised them. Frodo Baggins’ journey out of Bag End and on to Mount Doom is a gritty and morally grey story. There is clear good and evil, but under the influence of power – embodied by the One Ring – the virtues and vices of man are analysed by J.R.R. Tolkien through his characters. Nobody is safe from corruption or the temptations of an evil world. You can even play through this journey in a recently announced videogame.

J.R.R. Tolkien is undoubtedly a literary genius. But he is also a man of high moral value and a man that lived his life with honour. His monogamous love for his wife was undying and is an inspiration in today’s times, where divorce rates nudge closer to 50% with each year that goes by. He was a scholar, with an exceptional wit and intellect that caused the creation of his great literary works and even the creation of entire languages such as Elvish.

His mother’s love for nature was passed down to her son and therefore Tolkien despised industrialisation. Post Second World War England exemplified the effects of corporate greed, destroying all that is good in nature. This is what Middle-earth’s anti-heroes, the orcs, exemplify; mindless brutes, destroying all in their path in blind loyalty to an unknown power.

The Shire – corrupted by the evil of industrialisation at the end of The Return of the King.

Whether you are a Catholic or Protestant, Atheist or believer, every man and woman can appreciate J.R.R. Tolkien and his faith in his literature. Biblical tropes of good against evil, light against dark are abundantly present in Middle Earth. But it’s the finer stories of temptation, and the inner battles between vice and virtue that each character experiences, that are most powerful for readers. For no man is wholly good or wholly evil – every man is only human and thus cannot be expected to act in any other manner than his nature allows him. However, with every action there is choice. And there is always the right choice to be made. This is the true legacy of J.R.R Tolkien.

Cop the full ‘The Lord Of The Ring’ for you next big read here.

J.R.R TolkienLord Of The Rings