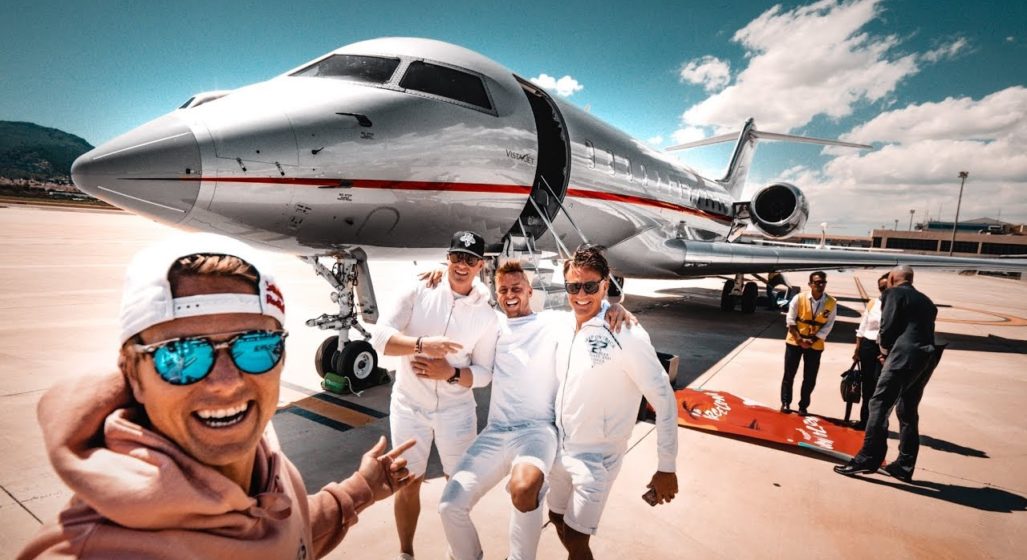 When world-famous vlogger Jon Olsson decides to get married, you can expect his loose AF bucks party was going to be one for the books.

Well, I wasted (debatable) the first 30 minutes of my working day this morning watching his epic movie-like recap, and it’s safe to say that it went straight to my head.

While I’m not here to put together your entire buck’s party itinerary like this fella’s (legendary) Father-in-law, I’ll happily get you looking in the right direction to win you that ultimate best man status from the boys. These are the epic and alternative buck’s party ideas that’ll have the whole wedding talking about it for years.

Destination? Easy, either Sydney or Melbourne, whichever one you’re not currently in. Not to put shit on our other, ahh, great cities, but if you’re keen for a belter of a weekend you can be guaranteed one in either of these. Side note – to be fair, Brisbane can also put on a good show.

As for the jet, well, we weren’t kidding when we said these would be epic suggestions. No waiting around, no rules. The bucks party starts as soon as you step onboard. Strippers? Go for your life.

Now you’re probably thinking this is ludicrously expensive, and you’d be right if you were any shmuck who would just call up and ask to book a private jet. But you’re better than that.

The guys over at Airly offer huge discounts to their members for interstate private jet travel (not a paid plug, we promise, that’s why we’re allowed to suggest strippers). Sign up and wait for a killer deal. They’re often last minute (i.e a week or two’s notice) but if you’re ready to jump on it ASAP, before you know it you’ll be living the baller life for just a few grand.

Sports Fishing Charter Off The Cape

Best time of year: second half of the year

Something many of us have wanted to do for some time, but it’s often too hard for all of your mates to coordinate the time off together. The good thing about weddings, and even maybe more so for buck’s parties, is that people never want to miss them.

The boys over at Far North Sports Fishing know how to do epic. It looks as if they’re the reigning champions of the word in a Far North Queensland context. Luxury liveaboard charters, helicopter transfers, the world’s best gear, need we say more?

From right up along the peninsula to way out beyond the reef, their flagship vessel the Blue Martini can sleep up to eight guests and is catered by its own onboard chef.

This isn’t any ordinary road trip or weekend camping with the lads. It’s a special event, so you’ll need some special cars. Land Rover’s Defenders are both as epic as they are capable facilitators of some gnarly adventure routes across the country.

Pick a destination to camp, or simply pack ’em up and drive straight out into the desert for the weekend, seeing where you end up. The guys over at Bear Rentals have a fleet of fully stocked and kitted out 4×4’s to hire at considerably cheaper rates than a private jet.

PSA: The strippers out west might be in short supply (or maybe the opposite, just at a, urgh, different quality). If that’s your biggest worry just pack a few surfboards and take the coast north!

Quite possibly the country’s coolest golfing destination, Barnbougle now boasts two pristine courses and welcomes any ability; can you think of a better place to have a hit with your mates?

You have a choice of cottages and villas – both rural and oceanside, where you can soak up the crisp Tasmanian air and listen to the sound of the waves crashing against the cliffs as you and the boys have a relaxed game by day and power through cases of vino by night.

If you take it up a notch and charter a private jet from either Moorabbin or Essendon airports you can pretty much land right on the fairway. There’s also a sweet sports bar on site.

Ideal squad number: As many as possible

Best time of year: Late March or early April (for the Sevens)

Alright, this one isn’t Aussie, but we had to give those of you who just aren’t satisfied with the above suggestions an even bigger option. Also, if you’re looking for cheap buck’s party ideas, just skip this.

The Rugby Sevens is always a good time, but in Hong Kong the tournament has a whole other meaning entirely. Hong Kong, in our opinion, can’t be beaten as an overseas buck’s party idea for Australians.

Vegas is overhyped, further away, and considerably more expensive, while Hong Kong is a cultural curveball, the nightlife is A1, the flights are always on sale and the food is unbelievable. Throw in the craziest party on the World Rugby Sevens calendar and surely we don’t need to justify it anymore. Qantas is doing $660 return flights before November 15th, for those who can’t wait until next March.