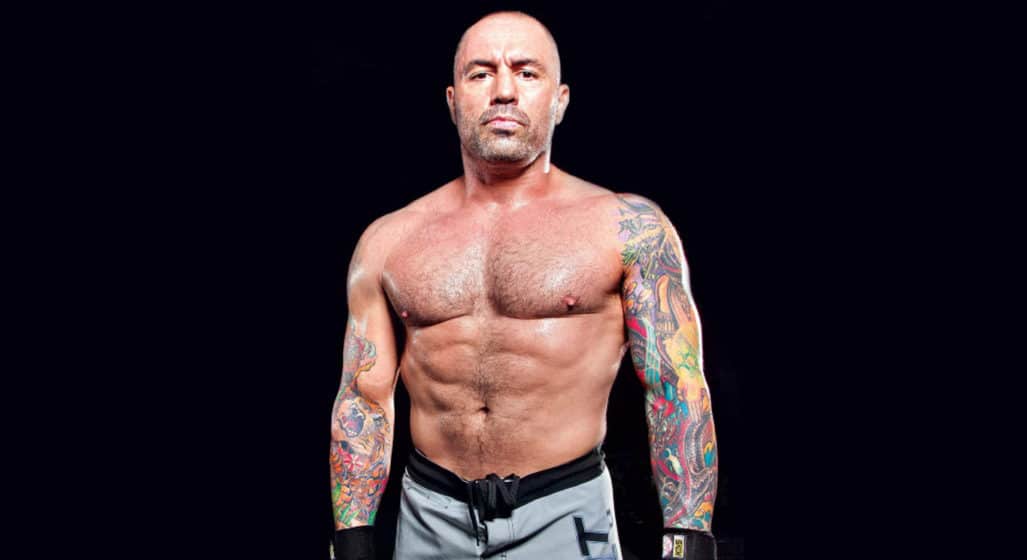 Joe Rogan is someone who almost needs no introduction. It’s damn near impossible to exist as a male between the ages of 15 to 35 in this current era without being enveloped by his ubiquity. But whether you know him as a comedian, the world’s highest-paid podcaster, colour commentator for the UFC, practising martial artist, or human DMT silo, one thing is for certain – the Joe Rogan workout and diet plan is certifiably intense. And based on how Mr Rogan is currently looking in his fifties, it seems to be delivering results.

Before we proceed, I feel it’s necessary to issue a caveat of some sort. What you’re about to read is highly specific. It may pose a challenge for many of you – and not in a “Grr, I’m going to come out on the other side stronger for it” kind of way. I’m talking about a workout plan and diet that could prove detrimental to the wrong people. There are also components that many might not have ready access to, including sensory deprivation routines and cryotherapy (hence why they haven’t been elaborated upon). So take everything with a grain of salt.

The two key characteristics of Joe Rogan’s eating habits include:

Translation: a whole lot of lean meats at specific times of the day. It’s no secret the man is a fan of hunting down his own grub, being a major advocate of killing wild game. As for the intermittent fasting side of things, Rogan personally opts for a 16-hour fast that begins in the evening and extends all the way into the late morning – meaning he skips breakfast. It’s also not unnatural to find him exercising on an empty stomach before his first meal of the day. Gotta widen that calorie deficit.

You know the saying, eat clean and train dirty. But more on the latter in just a moment. We’re talking about quite a disciplined approach. Cutting out as much processed foods, unnecessary carbs, and unnecessary sugars as possible. Or as Rogan states himself, “… no bread, very few carbs, no sugar, no bullshit…”. Hear that? No bullshit.

“Healthy food, a lot of vegetables and a lot of game meat, mostly wild game.”

As you will have probably guessed, Mr Rogan is very much a mind, body, and soul type operator. The underlying theme in the Joe Rogan workout plan and diet is to be holistic. He runs a well-oiled machine which he also “[changes the] spark plugs” for. The goal isn’t to be perfect, but to do your best when it comes to keeping yourself at your best.

“I take vitamin supplements every day. I take multivitamins, I take probiotics, I take vitamin B12 and D. I do everything that I can to put my body and my brain in a good place, so I’m keeping my engine smooth.”

Other supplements Joe Rogan consumes include:

It’s also no secret the man is 420 friendly. And DMT friendly. While this isn’t exactly integral for your own well-being – nor are we encouraging consumption of such substances for legal purposes – let’s just say Joe Rogan keeps an “open” mind. And perhaps we can all learn something from this little detail. Which, again, is by no means explicit or implied encouragement for legal purposes… this is purely for entertainment value.

A lifelong martial artist, Joe Rogan essentially dedicates all the time he has available to ensure he’s a human weapon. In his youth, he was the US Open Taekwando Champion – at a time when taekwondo was consistent and legit, unlike what you’ll find these days. There was a point where Rogan was also considering a professional kickboxing career, with an amateur record of 2-1. He would walk away due to blunt trauma induced headaches and so forth. CTE ain’t nothing to mess with.

The workout plan, however, isn’t just for the sake of maximising one’s ability to rearrange someone else’s face chimpanzee style. For example, hitting the treadmill to clear the mind isn’t exactly a foreign concept here. Nor is running to the canyon with the infinitely adorable golden retriever, Marshall Rogan.

Rogan reportedly takes himself to the iron church three to four times a week. Again, based on what we’ve seen, heard, and read, he tends to use the following:

Mastering all eight limbs, Rogan has been known to work the heavy bag, feedback machine, engage a few hearty rounds of pad work, as well as spar. For a better idea, check out the video linked below.

A Brazilian Jiu-Jitsu black belt under the famed Jean Jacques Machado (gi) as well as the one and only Eddie Bravo (no-gi), Rogan continues to train every other day to become the most complete fighter he can be. Drills, a few rolls, you name it.

Old mate time has it in for us all. The only way to keep thing where they’re supposed to be and preserve the function in all your limbs/joints is by working on your flexibility. That’s where yoga comes in. Rogan himself participates in two to three sessions a week. Non-negotiable for the lifelong martial artists out there. You can’t expect to throw your body against other bodies without logging in a few hours maintenance on the regular to prevent dire and painful outcomes.